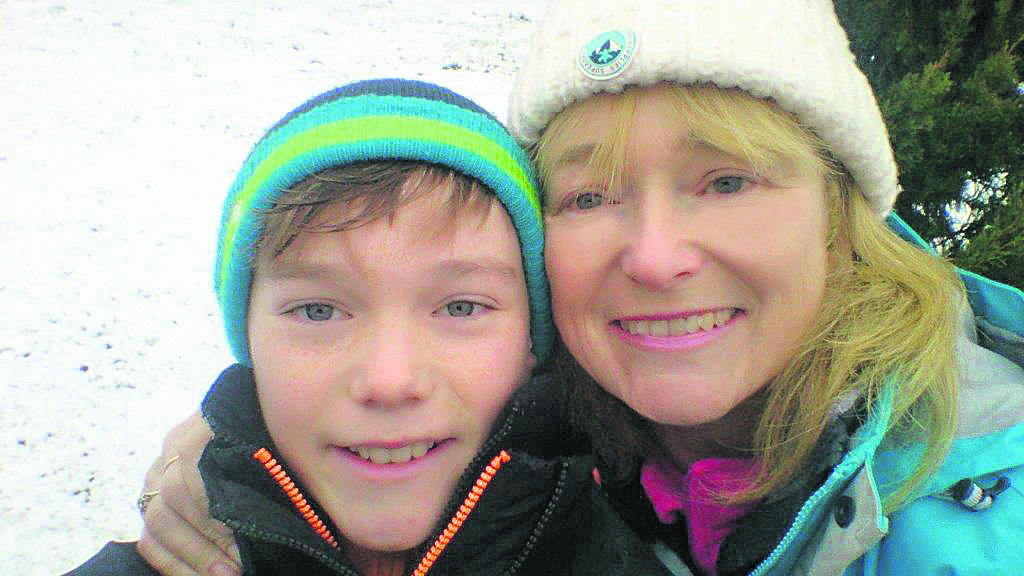 Perri with her son David after a race.

Perri Williams has been involved in athletics since her dad formed St Senans AC in 1977.

Perri has competed nationally and internationally since her first All-Ireland championships at the age of 12 and although a diagnosis of rheumatoid arthritis and sjogrens disease in the late 1980’s forced a premature retirement, she is still involved in athletics as a coach, motivator and mentor.

In a recent interview for the Coach in the Corner series which highlights the contribution of female coaches, Perri outlined her involvement in athletics and her current role in coaching.

The full interview is available on the Athletics Ireland website but last week Perri recalled her career for the Munster Express.

“Getting to my first All-Ireland as a 12-year-old to me was a fluke. I never considered myself a good athlete. Looking back now – I was very hard on myself. I had the notion that to be good was to win. To do less was to fail. I raced right through my juvenile years medalling in Leinster championships in 800m, 1500m and cross country –getting in the top six at Nationals but no medals. Finally, when I was under 17, I won my first national medal – a gold. Then of course I wanted more – several more medals followed from that first one and lots of national records too.”

Perri’s first major championship was the World Cup of race walking in New York in 1987. This was followed by the same event in Barcelona in 1989 and in San Jose, California in 1991.

“These were amazing experiences. As a rookie 18-year-old, New York City was an eye opener. I had never been out of Ireland before and it was all new. The race was held in Central Park with thousands of spectators. It was like nothing I had ever experienced before.”

“The experience of being an Olympian was amazing. From the training camp in France for three weeks before hand to the three weeks in Barcelona. I was lucky to be part of that tail end of the golden days of Irish Athletics – athletes like John Treacy, Frank O’Mara and Marcus O’Sullivan raced in their final games that year while with only three girls on the Irish team; myself along with Sonia O’Sullivan and Catriona McKiernan, I was in pretty good company. In the Olympic village we had the great Steve Backley of the UK, Linford Christie, Colin Jackson, Sally Gunnell. For a young girl at the time, it was awe inspiring. My family, friends and athletic club were all there too. Being in Barcelona it was just the ideal opportunity and excuse to attend an Olympic Games. It’s an occasion that cannot be wiped from my memory. Who would have thought back in 1977 when the club started that a local girl from Kilmacow would make an Olympic Games? In the end the disappointment of not doing my best does not dwell on my mind. Unfortunately, it was not my day at the Olympics – extreme heat and a foot injury meant that I was 37th. The hot humid conditions were really bad for my rheumatoid arthritis and I was in a lot of pain.”

Perri was flying at the start of 1993 and climbed the World rankings for the 3k and 10k walk, easily qualifying for the World Championships in Stuttgart. However once again the heat of an August event did not suit and the disappointment of not producing her best proved the catalyst in her decision to retire from race walking. By the Spring of 1996 Perri’s ongoing battle with rheumatoid arthritis was making training and competing extremely challenging and she decided to call time on her international career.

“If there was one thing that I would have changed it would have been to try and understand rheumatoid arthritis a lot more. I was afraid to tell BLE (Athletics Ireland) I had it, in case it would affect me qualifying. So I told no one and tried to deal with it myself – without medical assistance. As a coach now myself I understand a lot more from my own experience. If an athlete has a condition it needs to be treated.”

Since returning from the United States over a decade ago, Perri has been involved in coaching with her club St Senans and has also helped coach other athletes from other clubs to Youth and Junior World and Europeans.

“In St Senans AC at the moment we have a fantastic crop of athletes coming through the ranks and I hope that they too can go on to achieve things in the future. For my part I will give them all the help that I possibly can. Names like Tara Ramsawmy, Tadgh Connolly, David Williams, Caoimhe Phelan, Bronagh Kearns have all got their international vests and two more Peter McDonald and Sophie Jackman surely will soon. And behind them – we hope many more can do it. Even during this COVID 19 lockdown all our athletes were great to continue training. To be successful it’s not just about talent, in fact talent only plays a small part. It is all about mental strength and determination – which of course means hard work too. From a coaching perspective I would rather see an athlete start to emerge on the national scene at u16 and above than at u12. Too often the u12’s burn out. To this extent we train at an age appropriate level in St Senans and the focus is on what they can do and not what others can do so it’s about an individual’s or team’s progression from where they have been before.”

Although not able to compete for as long as she would have liked, Perri Williams still gets so much out of athletics and is as enthusiastic as ever for the sport.

“I love the journey athletics takes me on. It is a personal journey – both rewarding and fulfilling in many ways. I want to give back to the sport, the endless years of happiness and fulfilment that it gave me. I get a great feeling when I see an athlete achieve their goals – be it at county, national or international level. There is nothing that gives me more pleasure than seeing the happy faces when that goal has been achieved. My own son is now involved in athletics and emerging on the international scene, so the travel has started again. Now that is a good feeling too!”.