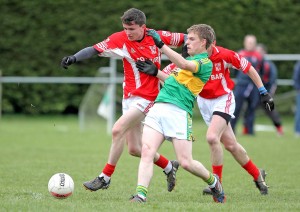 In an effort to get the Senior Football Championship played off on time to have a team in place to take part in the Munster Senior Club Championship, the County Board have pencilled in a number of games for this week and are hoping to have the number of teams involved cut to four by Friday evening.
This evening (Tuesday) The Nire and Ballinacourty clash in a final Group One play-off game to see who will top the group after both sides along with Clashmore all finished with eight points. Score difference could not be used to decide places as the current champions received a walk over from De La Salle in the group game, thus not giving them the chance to improve their score difference.
When the two sides clashed earlier this year it was the current champions that came out on top winning 0-8 to 0-6.
They are however without a competitive game since August 21 something that could well go against them as Ballinacourty have played three times since that date.
The winners of this game will top the group and will play last years’ intermediate champions Brickeys in the quarter finals on Saturday evening at 8pm in Fraher Field.
The side that looses this evening are also in action on Friday evening in the quarter finals where they take on Gaultier at the Saint Molleran’s grounds in Carrigbeg at 7.30pm.
A third game is also pencilled in for Saturday evening as Clashmore take on Kilrossanty in Fraher Field at 6.30, while the first of this years quarter final is down to be played on Friday evening between Stradbally and Ardmore in Fraher Field with the game having a 8pm throw in.
With Ballinacourty having a number of weeks to prepare for the game this evening without having to juggle in hurling commitments, they get the nod to overcome the challenge of The Nire.
Asking both sides to line out again on Saturday evening is a big ask on the players and is something that should not be asked of them. Needs must however and this will continue to happen if games are suspended during the summer months, leaving the vast majority of players void of any competitive games, only for them now to have to play catch up.
However even with both sides having to line out tonight and again on Saturday evening, you would expect both to come through and march onto the semi finals.
Stradbally should have too much for Ardmore in the first of the quarter finals while the best game of the quarter finals should be the clash of Kilrossanty and Clashmore.
Clashmore have lost their last two games and have also suffered a heavy defeat to Modeligo in the Intermediate Hurling Championship recently.
They lined out without Brian O’Halloran last weekend against Ballinacourty and if he was to miss out here again it would come as a huge blow to his sides chances.
Kilrossanty have in the past few years been moving in the right direction having been involved in a relegation play off a number of years back. They have some quality footballers and if as expected Clashmore will not be at full strength, then the Comeragh Men get the nod to reach the last four.