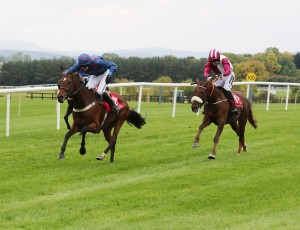 The first session of the two-day Punchestown meeting took place on Wednesday of last week and 20-year-old Sean Houlihan from Dungarvan will certainly treasure fond memories of the occasion for he partnered his initial winner on Irish soil aboard Petuna in the closing Irish Stallion Farms EBF Mares’ Flat Race.
The five-year-old Petuna, trained by Ballylaneen native Maurice Phelan for his brother Eamonn, vindicated the promise she displayed when finishing second on her debut at Roscommon in July by leading from one furlong out.
The winning daughter of Aussie Rules, a half-sister to Jessica Harrington’s black-type winning chaser rock The World, then valiantly maintained the tempo to account for favourite Earth Sister by three parts of a length.
The four-year-old Petuna is clearly in above-average sort and she will possibly now contest a flat race on the all-weather at Dundalk. Houlihan for his part works with Philip Hobbs in Somerset and he has already ridden one hunter chase and four point-to-point winners in Britain.
Donagh Meyler is making excellent waves at present and the seven lb claimer from Kilmacow, arguably one of the hottest properties in Irish jumps racing at present, continued his purple patch by landing the Festival 3 For 2 Deals On punchestown.com Handicap Chase aboard Colms Dream. Sent off the 3/1 joint-favourite, the Karl Thornton-trained Colms Dream took up the running clearly travelling best of all before two out.
In the final analysis however, the 104-rated Colms Dream returned with just a half-length to spare over Shield. Colms Dream is now earmarked to line up in another handicap hurdle at Down Royal later this month.
On Thursday, the standard of competition rose a notch at Punchestown and Don Cossack, at 175 the highest rated chaser in training in either Britain or Ireland at present, made a victorious return to action in the Grade 3 Irish Daily Star Chase.
The Gordon Elliot-trained Don Cossack was sent to the front by Bryan Cooper after the second last with the triumphant eight-year-old ultimately defeating Roi Du Mee by 12 lengths in the familiar Gigginstown House Stud silks.
Don Cossack now has a whole host of engagements and he must now be put on any shortlist for the coveted Grade 1 King George VI Chase at Kempton on December 26th. Cooper was earlier on the mark with Elliot and Gigginstown House Stud for he landed the Grade 3 Buck House Novice Chase aboard The Game Changer.
The by-now familiar Gigginstown silks were additionally carried to success by Gunnery Sergeant in the closing Punchestown For Events Flat Race, the son of Presenting making his initial start for Noel Meade a victorious one by beating favourite Golden Birthday to the tune of three and a half lengths.
At Downpatrick on Friday, Donagh Meyler teamed up with Paul Nolan to collect the Byerley Turk, Godolphin Arabian And Darley Arabian Handicap Chase with The Mooch. Frontrunning tactics worked a treat here as The Mooch made virtually all the running and he just held on as the post loomed to beat Old Castletown by a half-length.
It takes a very good horse to win twice within the space of three days but that’s precisely what Pat Flynn’s filly Mademoiselle Penny did in the second division of the CrownePlaza Leading Jockey & Trainer Handicap over an extended one and a quarter miles at Dundalk on Friday night.
Mademoiselle Penny supplemented her facile success at The Curragh three days earlier by leading from over two furlongs out and she then kept gallantly responding to the urgings of Waterford city jockey Danny Grant to repel Temasek Star by one and a half lengths. Mademoiselle Penny, who was running off a mark of 52 here, should have little difficulty in sampling further success over the coming weeks and months.