Roanmore 2-15
Ballyduff Upper 2-13
Roanmore advanced to the last eight of this year’s County Senior hurling championship on Saturday evening last when they came out on top against Ballyduff Upper in the opening game of a double header played at Fraher Field.This is a game that the Sky Blues looked at times as if they could win rather easily, but in the end were made to fight hard for this win and needed points from Billy Nolan and Gavin O’Brien in the four minutes of stoppage time added by referee Thomas Walsh at the end of the hour to secure their place in this coming weekend’s quarter finals. 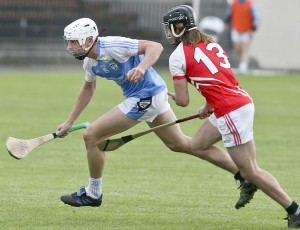 While the city side will be thrilled that they won this game, they will know that if they are to advance to the next round of the competition this weekend they will have to considerably up their performance as on another evening a dozen wides in the second half could well have cost them dearly.
Former Inter County player Gavin O’Brien impressed in this game finishing with nine points of his sides overall tally. There were times in the opening half that he could do no wrong and anytime the ball was played to him he caused all sorts of trouble to the Reds defence.
It was O’Brien that was first on the score sheet in this game as he knocked over the first three scores of the game in a five-minute spell in the opening nine minutes. Eoghan Murray pulled a point back for Ballyduff, but the Sky Blues hit back with the next two scores, firstly a point from Billy Nolan and then the first goal of the game on twelve minutes as Gavin O’Brien picked out an unmarked Emmet O’Toole with a neat cross field pass and he beat Shaun O’Sullivan from close range.
Eoghan Murray and Andrew Casey added points for Ballyduff with Gavin O’Brien responding with a brace of scores in between to give Roanmore a 1-6 to 0-3 lead after 20 minutes.
Eoin Madigan netted Roanmore’s second goal on twenty-one minutes to give his side a nine point lead after which Gavin O’Brien pointed again to give his side a double digit lead. 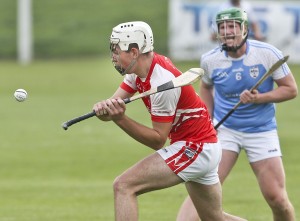 Ballyduff's Oran Leamy in action ahead of Roanmore's Billy Nolan

But Ballyduff would finish the half strong as the Murray brothers Eoghan and Conor pointed before Eoghan Murray would land 1-1 before the break, the goal coming from a quickly taken free where he finished to the net before Roanmore could put bodies on the line. Gavin O’Brien hit a point in added time at the end of the opening thirty minutes to give his side a 2-8 to 1-6 lead at the break.
Billy Nolan, Emmett O’Toole, Finán Murray and Eoin O’Brien all swapped early scores in the second half, Murray’s score coming from a well struck sideline cut before Nolan and Eoghan Murray pointed just as the game entered its final quarter.Conor Murray and Gavin O’Brien swapped scores to keep the game tight before Billy Nolan blazed across the face of the Ballyduff goal with three minutes remaining when it looked a goal was on the cards. Ballyduff went up field from the restart and they showed the Roanmore players how to do it as Andrew Casey set up Shane Kearney for a well taken goal. With just three minutes remaining there was just two (2-13 to 2-11) between the sides.
Eoghan Murray pointed for Ballyduff in the first minute of four added minutes to leave the minimum between the sides, but Roanmore would crucially land the next two scores through Billy Nolan and Gavin O’Brien to put daylight between the sides, and while Eoghan Murray would score just before the end, it proved to be a mere consolation score.