SSE Airtricity Premier League
Waterford FC 1
Shamrock Rovers 5
Having lost 2-1 to Cork City at the RSC the previous Friday, Waterford FC were hoping to get back on track when they played Shamrock Rovers at the Kilbarry venue on Monday week last but again they failed to take anything from this game. Jack Byrne, the Shamrock Rovers midfielder ran the show and he scored two brilliant goals and created another in what was an impressive display at times by the visitors. 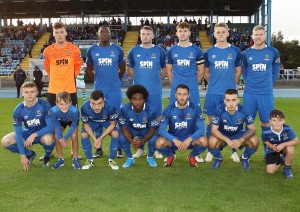 The Blues team showed three changes from the one which played Cork City. Maxim Kouogun, Cory Galvin and Shane Duggan started and Michael O’Connor, Zack Elbouzedi and Karolis Chvedukas sat out the contest. The outcome of this match leaves Waterford FC in a battle to retain their status in the top flight.
The Hoops nearly got off to a flying start inside the opening two minutes when they forced a corner out on the left after a mistake from Maxi Kouogun that saw Jack Byrne whip in the ball that picked out Lee Grace, but his header went wide of Matt Connor’s back post.
Roberto Lopes went close to breaking the deadlock from another Byrne set piece on twenty-two minutes when the central defender got on the end of another left-wing flag kick, but his towering header flashed wide the target. After his call up to the Republic of Ireland senior squad for the upcoming Internationals against Switzerland and Bulgaria, Byrne turned the game on its head with two stunning goals in the space of a five-minute period.The first arrived on twenty five minutes when a Kevin Lynch clearance was picked up by Aaron Greene, who slipped the ball to the unstoppable midfielder and he powered a 30-yard right-footed shot that Matt Connor got a hand to but couldn’t prevent the ball finding the net. 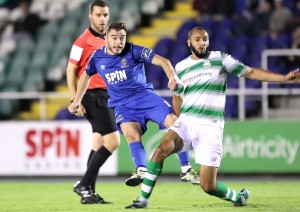 He was celebrating his second goal of the contest five minutes later when Ronan Finn done all the spadework before laying it off to Byrne and after getting past Tom Holland, his cracking strike from a similar distance whilst slipping fizzed past Connor. Waterford’s only chance during that one-sided first half came in injury time when Cory Galvin picked up possession on the edge of the penalty area, but his well struck effort went wide of Alan Mannus’ left-hand upright.
Blues boss Alan Reynolds introduced both Sam Bone and Dean Walsh at the half time break and it was the latter that had the first chance of the second period on fifty four minutes when he got on the end of Walter Figueira’s right-wing cross, but his first time shot was high over the crossbar. JJ Lunney gave the visitors a helping hand when the midfielder gifted Rovers their third goal on sixty one minutes when he played a back pass straight to Aaron Greene, who couldn’t believe his luck when he was faced with only Matt Connor to beat as he finished cooly from sixteen yards.
It was the brilliance of Jack Byrne that carved out a superb fourth for Stephen Bradley’s side eight minutes when he picked out Greene’s run with a stunning ball and he lobbed the ball over the advancing Connor from thirty yards. Cory Galvin scored a fantastic consolation goal for the hosts on seventy eight minutes when he let fly with an unbelievable right-footed strike from thirty yards after he had taken a pass from Dean Walsh on the left-side of the area.
It was Shamrock Rovers that completed the scoring with adding a fifth goal on eighty eight minutes when Graham Burke got free down the left channel before crossing to the back post where Thomas Oluwa was on hand to tap home to an empty to round off what was a miserable night for the Blues.