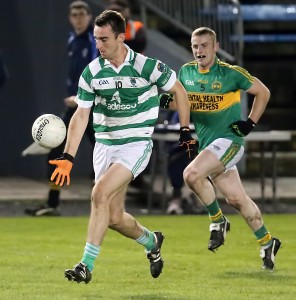 Ballinacourty staved off a tremendous challenge from Kilrossanty to progress to Friday’s SFC Final after a stirring hour’s football at Fraher Field on Saturday last.
In a semi-final that raised the bar from the previous night’s compelling face-off, patrons witnessed a welcome reminder about the merits of knock-out football, and the futility of a group stage with too many meaningless matches played to reach this particular juncture.
And given Stradbally’s recent history, of producing their season’s best display at the semi-final stage, coupled with the form of Ballinacourty’s Patrick Hurney, Michael O’Halloran and Shane O’Gorman, the green and white will go into Friday’s final as marginal favourites.
But Courty’s passage to the final was by no means smooth, as a fighting fit Kilrossanty side came closer than anyone has in recent years to toppling one of Deise football’s big three.
They led by 0-7 to 0-5 at the break following what was, for me, the best half hour’s football played in this year’s Championship.
Ballinacourty, bolstered by the return from Dubai of wing-back Shane Briggs, were two points to the good by the fourth minute through Shane O’Donovan and Patrick Hurney (a free) but Kilrossanty drew level within five minutes thanks to white flaggers from Alan Quinn and Paul Whyte.
An attendance responsible for a gate of €2470 (in addition to 170 passes) saw Patrick Hurney edge Courty ahead after 12 minutes after excellent support play from emerging talent Conor
Prunty but Joey Veale, released by Paul Whyte, restored parity barely a minute later.
Seconds later, Pa Cunningham was played through on the Ballinacourty goal by Eoin Cummins but his resultant shot flew over Stephen Enright’s crossbar for a point. Patrick Hurney played in the busy Mark Ferncombe for a 15th minute equaliser and the point trading continued through Paul Whyte (a free) and the marauding Sean O’Hare.
Come the 23rd minute, Kilrossanty, managed by Emmet Doherty, edged ahead after Pa Cunningham brilliantly landed a point created by David Power and Paul Whyte.
And when Shane Briggs was correctly black carded after 27 minutes, that 7,728-kilometre trip home from Abu Dhabi must have felt even longer for the Deise veteran.
Paul Whyte, who once again demonstrated his considerable talents over the hour, played in the impressive David Power for a terrific injury time point and only for Stephen Enright’s block on Whyte’s goal-bound shot, Kilrossanty would have gone in five points up.
Just 12 seconds of the second half had elapsed before Patrick Hurney, in the form of his life, added to his tally, and both he and Paul Whyte added the next three points, all from frees.
Michael O’Halloran opened his account in the 38th minute, moments before Eoin Cummins shot tamely into the grasp of Stephen Enright.
Just shy of the three-quarter mark, Ballinacourty goaled to go two points clear, after the excellent Prunty regained possession 40 metres from goal, passing to Mark Ferncombe. Ferncombe surged forward and picked out Shane O’Donovan, who slammed the ball into the top left hand corner of 42-year-old Darren Mulhearne’s net.
Paul Whyte replied with a free, while in the 46th minute, Gary Hurney intercepted a poor clearance and rifled the ball over the crossbar when a goal looked just as likely. Darren Mulhearne, admittedly under pressure when advancing from goal, hopped the ball twice, which led to another Courty free, duly sent between the posts by Patrick Hurney. And when Hurney, Prunty and substitute Michael Maher picked off the next three points with 10 minutes remaining, Ballinacourty led by six and the contest appeared to be settled.
But a Kilrossanty side, surely the fittest group to ever wear club colours, refused to go quietly, with Paul Whyte tagging on his fifth free in the 52nd minute. And when Alan Quinn found the net after a move instigated by David Power and Pa Cunningham barely a minute later, only two points separated the sides.
Try as Kilrossanty undoubtedly did, they could not add to their score, and it was entirely fitting that Patrick ‘Pudge’ Hurney landed the night’s final point with less than a minute of normal time remaining.
Kilrossanty can draw solace from a performance free of fear, something they should draw on come the 2016 campaign. But Ballinacourty, my own personal tip for the Conway Cup for quite some time now, appear to have the midfield mix and the offensive might to just get the better of Stradbally this Friday night.
Ballinacourty: Stephen Enright; Shane Briggs, Sean O’Hare, Brian Looby; Richie Foley, David Collins, Eoin Bergin; John Hurney, Conor Prunty; Michael O’Halloran, Evan Collins, Patrick Hurney; Shane O’Donovan, Gary Hurney, Mark Ferncombe.
Scorers: Patrick Hurney (0-7; 0-3f), Shane O’Donovan (1-1), Sean O’Hare, Conor Prunty, Michael O’Halloran, Gary Hurney, Mark Ferncombe and Michael Maher (0-1 each).
Substitutes: Conor McCarthy for Shane Briggs (Black Card, 27 mins), Michael Maher for Evan Collins (42) Tiernan Murray for Shane O’Donovan (60) and Mark Gorman for Patrick Hurney (60).
Kilrossanty: Darren Mulhearne; Killian Whelan, Mark Prendergast, Barry Prendergast; James Whyte, Stephen Prendergast, Pa Whyte; Tommy Prendergast, Paul Whyte; David Power, Eoin Cummins, Alan Quinn; Pa Cunningham, Michael Walsh, Joey Veale.
Scorers: Paul Whyte (0-6; 0-5f), Alan Quinn (1-1), P Cunningham (0-2), Joey Veale and David Power (0-1 each).
Substitutes: Paul Keating for Michael Walsh (37 mins), Willie Brazil for Eoin Cummins (58) and Ciaran Keating for Pa Cunningham (59).
Referee: Tommy O’Sullivan.