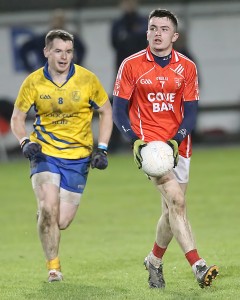 Stradbally’s Jack Mullaney steers away from The Nire’s Shane Walsh at Fraher Field on Saturday last.

While admittedly impressive, devastatingly so over the opening quarter hour against the defending champions on Friday last, Stradbally remain a somewhat unfinished article ahead of Friday’s clash with Ballinacourty.
Despite going 13 and 19 minutes respectively between adding scores to their tally in either half, Packo Curran’s still did enough to prevail – and deservedly so – against a Nire side whose defeat demonstrates how hard it is to land back-to-back titles.
That Stradbally appear to be unwittingly attempting to win an eighth title this century in the hardest manner possible is difficult to dispute, all the more so when one considers they also failed to score for 27 minutes in their quarter-final win over Ardmore.
Can they get the better of a Ballinacourty side who, up to now, have not found scoring as significant an obstacle?
And when considers how well Stradbally have played in phases of their previous two semi-final victories, only to fall below their traditionally high standards in both subsequent finals, the men in red will be doubly determined to land an 18th title. But they’ll do so as underdogs, and that won’t concern them in the slightest.
On a dog of a night in Dungarvan, with the wind hurtling towards a swollen Colligan, Stradbally stormed out of the blocks, leading by 1-4 without reply by the 14th minute.
Michael Sweeney kicked the opening point after two minutes, but only after The Nire’s Justin Walsh had brilliantly blocked Ger Power’s goal-bound effort. Luke Casey and Robert Aherne linked up to release Shane Aherne for a seventh minute point and four minutes later, the Stradbally garden grew all the rosier.
After superb link-up play between Michael Sweeney and Ger Power, Robert Aherne slotted the ball past Tom Wall to send the Covemen five points clear without reply. It’s fair to say The Nire were rocking on their heels after just 11 minutes. And when the Aherne brothers added a point each in the 13th and 14th minutes respectively, the road to redemption grew even longer for Benji Whelan’s charges.
Shane Walsh finally got The Nire off the mark come the 16th minute, only for Shane Aherne to radar a 45 between the uprights barely a minute later. Conor Gleeson struck a 24th minute free on a night when €2300 was taken at the Fraher Field gate, but one thought it wasn’t going to be The Nire’s night when Brian Wall inexplicably missed a free in front of the posts from the 21-metre line.
Shane Aherne latched onto one of several high balls bombed into The Nire red zone to register Stradbally’s seventh point on the half-hour, but Jamie Barron gave the men in yellow and blue a smidgen of hope when pointing in injury-time. Nonetheless, the holders went in trailing by 1-6 to 0-3 at the break.
The good start The Nire required after the interval didn’t materialise, and they were left with a mountain to climb after Shane Aherne’s 45, despite his slipping as he kicked, sailed all the way into the net to leave Stradbally nine clear.
Another team might have packed it in by then, but not the ‘Ballymac’ men are made of stronger stuff, as a brace of Gleeson frees and a Shane Walsh point reduced their arrears to six points by the 39th minute.
Shane Aherne’s 42nd minute free would, remarkably, prove Stradbally’s penultimate score as the rain eased but the wind kept howling.
Brian Wall converted a free in the 43rd minute before a 10-minute scoreless spell notable only for four substitutions. Conor Gleeson landed a 53rd minute free for The Nire as both teams struggled to establish some rhythm in appalling conditions.
Three minutes later, Gleeson turned provider for the advancing Dermot Ryan, who slid the ball beyond a mass of muddied limbs and into the net to leave just two points between the sides.
The next score was likely to prove massive as these two great rivals slugged it out, but it didn’t arrive until the 61st minute, when Stradbally substitute Eoin O’Brien fisted the ball over the bar following fine support play from the energetic Tommy Connors.
The contest ended on a sour note when Shane Walsh received a straight red card for striking Shane Aherne on the standside of the pitch; after Aherne’s boot (as seen by at least two press box occupants) had made contact with the grounded Walsh, just moments earlier.
Thankfully, the incident didn’t escalate beyond that, and moments later, Anthony Fitzgerald’s whistle signalled a remarkable 13th final appearance for Stradbally in this century alone.
Stradbally: Eoin Cunningham; Kevin Lawlor, Shane Lannon, Kevin Coffey; Tommy Connors, Tony Grey, Jack Mullaney; Michael Walsh, John Hearne; Daniel Weldon, Shane Aherne, Robert Aherne; Michael Sweeney, Luke Casey, Ger Power.
Scorers: Shane Aherne (1-4; 1-1 45, 0-1f), Robert Aherne (1-2), Michael Sweeney and Eoin O’Brien (0-1 each).
Substitutes: John Coffey for Ger Power (38 mins), Paddy Kiely for Daniel Weldon (49), David Grey for John Hearne (52) and Eoin O’Brien for Michael Sweeney (59).
The Nire: Tom Wall; Justin Walsh, Thomas O’Gorman Diarmuid Wall; Seamus Lawlor, Maurice O’Gorman, James McGrath; Shane Walsh, Craig Guiry; Darren Guiry, Conor Gleeson, Jamie Barron; Shane Ryan, Dylan Guiry, Brian Wall.
Scorers: Conor Gleeson (0-4f), Dermot Ryan (1-0), Shane Walsh (0-2), Jamie Barron (0-1) and Brian Wall (0-1f)
Substitutes: Michael Walsh for Seamus Lawlor, Michael O’Gorman for Craig Guiry and Dermot Ryan for Shane Ryan (all HT), Gearoid Hearn for Dylan Guiry (43 mins) and Ciaran Cusack for Jamie Barron (52),
Referee: Anthony Fitzgerald.