Crowd Behaviour and Media Coverage among the RSC Talking Points

Football is football and often it’s not for the fainthearted and those with delicate ears. Everybody loves a bit of drama and controversy that adds spice to the proceedings but – and in terms of last Friday’s excitement at Kilbarry, there is, regrettably a few ‘buts’ I felt I needed to mention this week.
A lot of youngsters are now attending the RSC and the club does a good job catering for families, and when it comes addressing racism, foul language, etc.
Unfortunately, most parents present last Friday night would have preferred if their children had not witnessed such angry scenes. 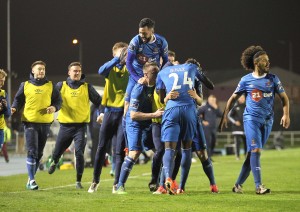 The Blues are flying high again after a decade in the soccer wilderness. | Photo: Noel Browne

Alright, the on-field stuff could be interpreted as part of the theatre of the game but an angry, baying crowd, many of whom were screaming obscenities, was not a suitable environment for children. And that applies to any code of sport.
Also, I reluctantly mention a separate little difficulty that has materialised at the RSC. It affects only a small number of people but, if not nipped in the bud, it could pose a serious problem for management down the line and that is why I raise the matter now.
The press are at the back of the Main Stand was standing room only on Friday night as it was filled to overflowing with representatives from regional and national newspapers plus a number of radio stations and other ‘new media’.

The club’s media team, led by communications manager, Mark Hill, assisted by Adrian Flanagan did a superb job as usual but all their hard work was undone when most of the writers and broadcasters present were unable to view the action at critical times.
The occupants of the two top tiers of seats in the stand, beneath the press box, repeatedly stood up, blocking the view of those inside the box. It happened during the Shamrock Rovers game on March 23rd but it proved much more frequent on Friday night last.

Some of the people probably just jumped to their feet in excitement but others knew exactly what they were doing and ignored pleas from reporters to sit down.
One radio commentator was abused with the two-fingers gesture when he appealed to those in front to sit down.
The bottom line is that match reporters and broadcasters love coming to the RSC, one of the best grounds in the country. But that could change. Good media facilities and an excellent service means little if people can’t actually see the game. Still, it’s great to see the club back in the headlines again and riding high in the top flight. Long may they reign!