Waterford FC recorded their second away win of the season when they proved too strong for Limerick in The Markets Field on Friday night last.
The three points moved the Blues onto 18 points, the same number of points as unbeaten Dundalk and just one point behind the leaders, Cork City.
Waterford FC play the Leesiders at the RSC this Friday, a game that will see the biggest crowd attend the local venue for a league game for decades.
In fairness the hosts had a couple of chances and Lawrence Vigouroux produced two wonderful saves, but overall this was a contest Alan Reynolds men bossed from the outset. Despite a sticky and bumpy pitch the Blues knocked the ball around in great style and they played some of their best football of the season during the 90 minutes.
After scoring a brace in the home win against Shamrock Rovers, Courtney Duffus showed his prowess in front of goal once again with his fourth goal of the season to give his side t 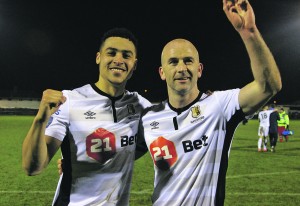 The Blues got the second goal their dominance deserved on 84 minutes from the penalty spot. Tony Whitehead brought down Izzy Akinade in the area and skipper Paul Keegan sent keeper Brendan Clarke the wrong way from penalty kick.
The scene is now set for what promises to be one of the game of the season when Cork City, with six wins, one draw and one defeat from their eight games, visit the RSC on Friday night next.
Blues manager Alan Reynolds is hoping for a huge attendance at the RSC on Friday next.
“I have no doubt the fans will have RSC rocking for the Cork City game next Friday night. I would urge them to get their tickets for the game early because I think we could be looking at a massive attendance. They are all delighted in there and I’m delighted myself.
“I’m not saying that we were fantastic but there was good character. That’s what I liked about us tonight and that’s what we are. We dig in, work hard and give everything for the shirt. It’s great to get another win but we’ll move on and look to the next game.”