LOCAL Councillors have sought a meeting with GAA representatives to discuss redevelopment plans for Walsh Park.
Speaking at the March Metropolitan District meeting of Waterford City & County Council, Cllr Eddie Mulligan (FF) said he has been receiving many calls from residents in the area of Walsh Park who are seeking an update.
He said he is receiving four calls a day on the matter. “I don’t know what the GAA’s pans are,” he said.
“Would it be possible to invite a member to the GAA to the Metropolitan Council to update us and give us an insight into what their plans are for Walsh Park?”
Cllr Pat Fitzgerald (SF) suggested that, if members of the GAA are going to address Councillors, it should be at the Council’s plenary meeting.
Cllr Mulligan then asked that the issue be brought before the Corporate Policy Group (CPG) so that it is placed on the agenda for the next meeting.
Senior Executive Officer Billy Duggan said he would take this on board and refer the issue to the CPG for decision. 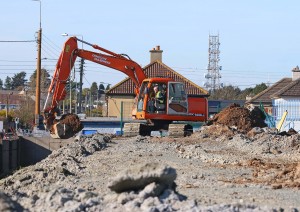 Local Councillors are seeking a meeting with GAA representatives to discuss the future of Walsh Park, where works are already underway. | Photo: Noel Browne

Also commenting on the issue, Senior Executive Engineer Conor O’Neill referred to the removal of the wall on the Keane’s Road side of the ground, which has since been completed.
Council representatives met with GAA representatives recently to discuss this work and the traffic management system which is being implemented.
Meanwhile, the Irish Examiner has suggested that Waterford will not play a home Championship match until 2020.
“We are anxious to finalise our plans, talk to the residents in the area and get an agreement. The residents will be our main focus for the next while, as we don’t want to make their lives uncomfortable,” said Waterford County Board Chairman, Paddy Joe Ryan.
“The big thing is to get our plans through the council and then start the redevelopment work. Unless the planning process goes through quickly, Walsh Park won’t be ready for the 2019 Munster Championship. We are almost in April and the development, once we have received planning permission, will probably take 12 months. This is a job that will have to be done properly.”
A revamped Walsh Park is set to include:
* Bucket seating in the covered stand
* A corporate section in addition to new media facilities
* An uncovered terrace at Keane’s Road
* A covered terrace opposite the covered stand (with an option to seat the terrace) and
* Dressing rooms and offices at the City End, which would effectively made the ground three sided from a spectator perspective.