"League's Integrity has been Damaged"

Deise boss justly calls for Leitrim match to go ahead

Failure to honour the outstanding matches yet to be played in the National Football League will damage the integrity of the competition according to Waterford senior manager Tom McGlinchey.
Speaking ahead of the Deise’s victorious run-out in Ruislip last Sunday, McGlinchey expressed dissatisfaction with the view Croke Park has expressed in relation to the snowed off fixtures of March 18th and 19th, including his team’s home clash against Leitrim, which was due to be played in Ardmore.
“Wanting to fulfil all of your League matches is hardly an excessive demand,” Tom McGlinchey told The Munster Express en route to training on Thursday last. “But right now, we’re not sure if we’ll get to play Leitrim, which both teams want to do, just as Wicklow still wish to play Limerick, in a match that’s been on the schedule for several months. We only get a guaranteed nine matches each year between League and Championship, and the idea now that we might lose one of those matches is incredibly frustrating. To be honest, I can’t believe I’m even having this conversation.” 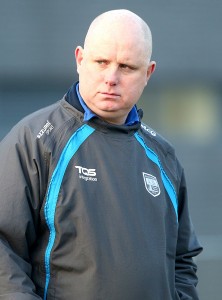 Praising the efforts of Waterford County Secretary Pat Flynn to see the match fulfilled, Tom also said it was “well known” by the end of the week that the Leitrim panel were travelling to Ardmore when news broke that the March 18th game had been postponed.
It’s been widely speculated since then that Leitrim players, with some justification given that most surely had pre-planned work or family commitments on Bank Holiday Monday, had refused to travel south for the rescheduled match on Monday last.
But given that the match will have no impact on the promotion question, the prospect of it not being played at all, in the context of keeping (most of) April clear for club activity, appears the likelier outcome. But as Tom McGlinchey contended, this simply isn’t good enough.
“All four teams are very anxious to play out their games,” he stated. “Nobody likes to see games at a national level being declared null and void. We’ve only got two national competitions, and in terms of games played, there’s a good argument to be made that this is the most important competition we play in every year, and if a national competition is not played out fully, then you’re damaging its integrity. The fact that none from Waterford, Leitrim, Limerick or Wicklow aren’t in the promotion shake-up shouldn’t even come into it. This is still a competitive match that I want my players to play in and it would be ideal for us from a Championship perspective, to see the match with Leitrim getting the go-ahead.”
With that in mind, all four managers had been in contact with a view to playing both outstanding matches at neutral venues, with Tom McGlinchey and Leitrim counterpart Brendan Guckian agreeable to staging the game in Abbotstown on Wednesday, April 25th.
“But our request fell on deaf ears from Croke Park and that’s incredibly disappointing,” the Waterford manager added. “After all, Division Four teams have as much a right to play all of their games as any Division One team does. And we’re not being afforded even that.”
McGlinchey added: “Croke Park don’t seem to be taking the bigger picture into account. We wanted to try out a few more players and on top of that, we don’t want to finish bottom of Division Four. We want as many points as possible and to take that game away from us, particularly when both ourselves and Leitrim had agreed to play the game at the end of the month, just doesn’t make any sense to me…the four counties got together and came up with a good solution for the GAA so that they wouldn’t be left with the embarrassment of having unfulfilled fixtures…it just seems to me that we’re in Division Four and we’re a thorn in their side that they just don’t want to deal with…and to take away one with a whim just doesn’t sit well with me.”