Injury-time goal seals dramatic home victory
The biting wind had the fourth estate on its collective toetips outside the team dressing rooms on Sunday last following a match which literally blew one way and the other. As players showered and mentors traded post-match sentiments, Waterford’s walking wounded assembled against the relative shelter of the team’s kit van.
They looked as happy and content as any group that I can recall, no doubt some of them privately relieved that they hadn’t had to hurl in conditions that only lacked falling frogs and a plague of locusts. During the first half’s hail-blighted conclusion, most of the Waterford bench briefly sought shelter in the press box, hardly any player’s natural domain, but again in those brief minutes, there was an air of excited calm about the group. 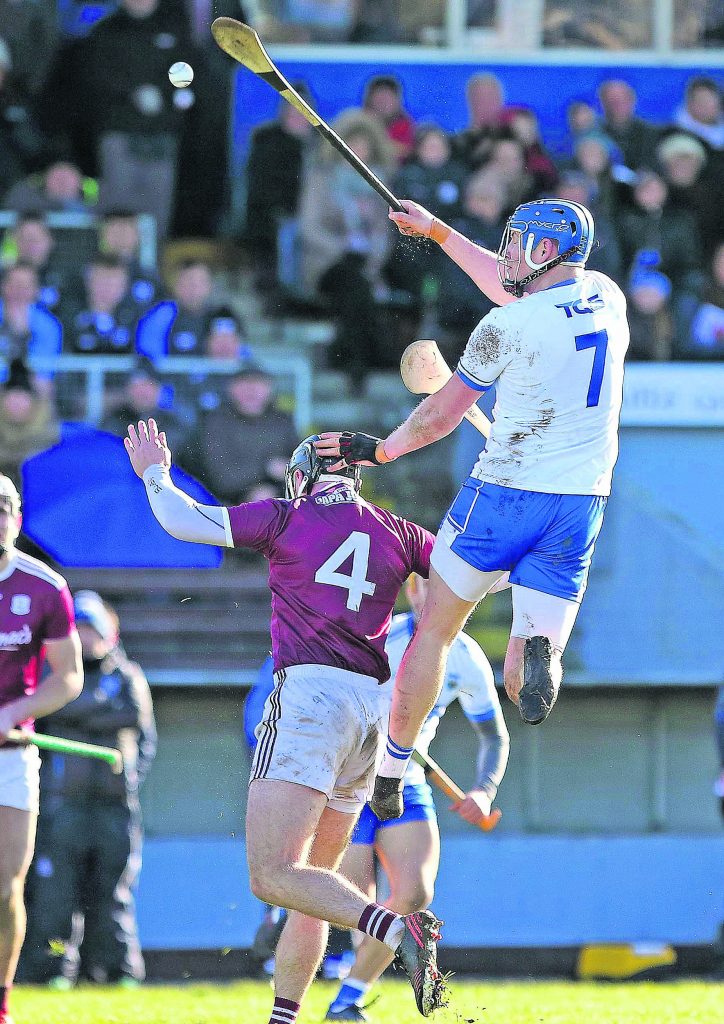 They exuded positive energy and looked thoroughly comfortable in each other’s company – and to see them congratulate their fellow panellists at full-time re-affirmed for me that this group, under new management, is clearly at ease under Paraic Fanning’s tutelage. None of that may mean Waterford will end a 60-year wait for Liam MacCarthy come summer’s end, but it’s clear to this observer that the collegiate spirit synonymous with the previous management has been retained. The less rarefied climes of Division 1B, coupled with the restructuring of the 2020 League, may well have taken some of the competitive stings out of recent weeks, but any day Waterford get the better of Galway is one worth noting. The conditions made a farce of the contest at times, no doubt whatsoever, but there was no doubting the commitment on show from both sides, with the Deisemen ultimately making the better of this wind-affected fixture.
Paraic Fanning saluted Waterford’s second half resolve as his side clinched a morale boosting home victory over Galway. “I don’t think anyone watching could realise how hard it was to play in those conditions in the first half and when you look at how hard Galway found the second half, it actually showed that we did really well for a lot of the first half,” said Déise manager Paraic Fanning. “We gave away a sloppy enough goal alright but we were still quite confident at half-time that we could pull it back. Fair enough, we didn’t score during the second quarter of the first half but Galway only got two points in the whole of the second half and we managed seven points during the first half…but we just stressed to the lads to stick with the game plan, that we’d get our chances, that we’d get our shooters on the ball and we managed to peg them back pretty quickly at the start of the second half.”
Stoical Galway boss Micheal Donoghue conceded that his side hadn’t “played in anything like that in a long time”. He added: “In the first 10 or 15 minutes it was very strong and we were just pinned back in our own half and we just couldn’t get it up the field. Obviously with it, (Waterford) were going to be very strong but I can’t fault our lads’ effort or work rate, I thought they worked to the death and it was just unfortunate that we conceded late on.” Clare, Waterford’s opening Championship opponents, await in next weekend’s Quarter-Final, with neither venue nor specific date established at the time of writing. That Waterford will enter that fixture in bullish mood is undoubted on the back of last Sunday’s morale boosting second half comeback. Let’s hope the winning streak will be maintained against The Banner.