Paraic Fanning was justly pleased by Waterford’s fine, albeit wind-assisted recovery which saw them overcome Galway deep in second half stoppage time on Sunday last. “I don’t think anyone watching could realise how hard it was to play in those conditions in the first half and when you look at how hard Galway found the second half, it actually showed that we did really well for a lot of the first half,” said Fanning. 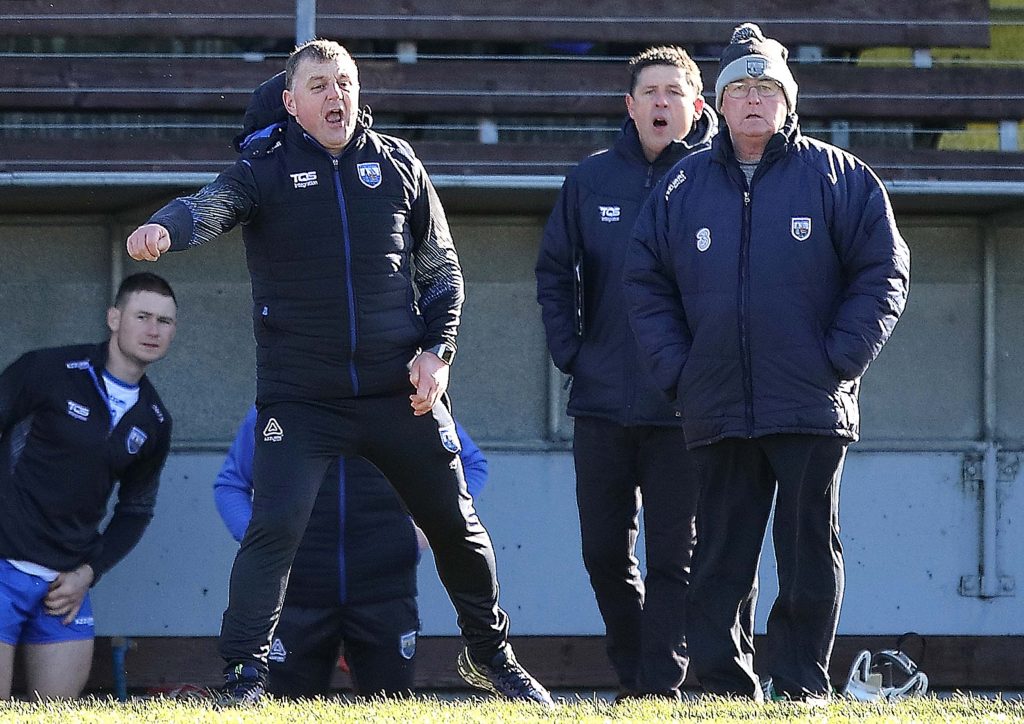 “We gave away a sloppy enough goal alright but we were still quite confident at half-time that we could pull it back. Fair enough, we didn’t score during the second quarter of the first half but Galway only got two points in the whole of the second half and we managed seven points during the first half…but we just stressed to the lads to stick with the game plan, that we’d get our chances, that we’d get our shooters on the ball and we managed to peg them back pretty quickly at the start of the second half.”
The Mount Sion clubman added: “But I was delighted with the way the lads stood up in the second half. They were like a wall and there was no going through them. They were absolutely brilliant and we were delighted with their overall effort and work rate which was fabulous. So all in all we’re very happy to get the win and looking forward to next week now.” Attitude wise, the Déise boss feels such character can’t be driven into the players by the management team. “I don’t think you have to instil too much of an attitude into these lads. They really want to work and play well for Waterford , they’ve a fantastic attitude and you could see that today. We really wanted to get the win, having the game in Walsh Park – it’s the first time in a while we’ve had a home game – and you could really hear the crowd, hear the buzz, so we were happy to get a win in Waterford for the home supporters.”
Did the support play its part too? “Oh they did (the crowd) make a difference in the second half. You could sense the support growing and it did make a difference and hopefully will continue to make a difference for what lies ahead in the coming weeks and indeed into the summer.” Saluting another terrific display by his forwards, Paraic Fanning said: “Shane (Bennett) did very well, and he could have had a few more frees; Peter (Hogan) did a fantastic job and for the goal, you’d great work from Austin (Gleeson) too; Peter did very well to win that ball, took it on and laid off the pass at the right time and it was a nice finish (from Shane).”
Fanning continued: “We all like winning and we wanted to win the game. There wasn’t really high stakes regarding finishing second or third (in Division 1B) but it’s a great psychological boost to win and to win in Walsh Park. People say we don’t play well here – well, we played well today…”It’s great of course to be going into the next match on the back of a win over Galway. Everyone loves to win matches and Galway are a serious outfit so it’s great to have got the win. Now, if we had lost today, people might be doubting us a bit but it was a great win and now we have to drive on from here.”
As for next Saturday’s opponents? “Well I’ve lots of thoughts on Clare at the moment. Clare came down here and gave us a tough examination, especially in the first half so that’s not lost on us. Injuries wise, the good news is that some of them are on the way back and we’re very close to having a lot of them cleared up (by next weekend) And while I obviously haven’t given the next match too much thought at this stage, I’ll be give it plenty of thought over the next few days.”