National Football League, Division 4
London v Waterford
(Rusilip, Saturday, 12.30pm)
Waterford’s interest may well have come to an end even with two rounds of games still to be played, but that will not mean Benji Whelan’s side will travel across the Irish Sea this weekend for a clash with bottom of the table London in Ruislip just with the intention of fulfilling the fixture or making it a good St. Patrick’s weekend away. At the start of the year getting out of Division Four of the National League was the main aim for the county senior football team in 2019. However a sluggish start in which they lost their three opening rounds of games against Wicklow, Limerick and Derry coupled with the perfect start by both Derry and Leitrim means that Waterford will have to wait another 12 months if they are to get off the bottom rung of the National Football League ladder.
On paper this is a game that Waterford should win but the exiles have caused the Déise County more than their fair of troubles, both in Ruislip and in Carriganore and Dungarvan in recent years and they will be confident that they can do the same this year. The exiles will know that should they beat Benji Whelan’s side and then get a good result away to Wicklow in the final round of games, they could finish in the top half of the table which in itself would be a very rare thing for them, and set them up nicely for a stab at the Connacht Football Championship in a couple of months time.
Their only win to date was a 2-11 to 1-6 over Wexford in Ruislip in the third round of games, a result that gave them confidence going into the last fixture against a strong Leitrim side in Carrick-on-Shannon. London pushed the home side all the way in that game before finishing up on the wrong end of a 1-9 to 0-7 result.
Waterford cannot gain promotion this year but they will still be looking to finish as high up the table as is possible. Wins over Wexford and Antrim in the last two games have helped to increase confidence in the panel and they will travel across the Irish sea believing they can record a third win before they play a Leitrim side in the final round of games.
Waterford may struggle to win a Munster Championship this year or any time in the near future, but a run in the All-Ireland qualifiers is not beyond the bounds of possibilities. Benji Whelan and his management team have made a lot of changes to the panel with a number of new faces coming in and so far the new faces have given a good account of themselves. Whether some of the more experienced faces will be available for the championship remains to be seen, but those that are in the panel will know that there is now a place in the championship teams to be won. 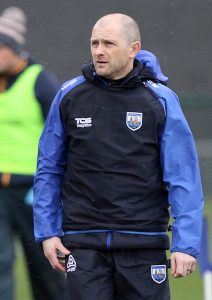 Players that have been given time in Waterford’s last two games will be looking to put in a good shift and ensure that they are in contention for a starting place when they travel to Ennis to play Clare on May 11th.
These two sides have clashed in the league since 2012 and in the head to heads over this time the exiles lead three wins to two with two draws. Confidence should be high in the Waterford camp as they head to London and they should return home having drawn level on the head to head wins in league games played in recent years. So how pleased is Benji Whelan with the progress the panel has achieved under his watch thus far? “I think we’re on a par with where we thought they’d be, there’s a lot of things that are positive, there’s an awful lot of things to learn still, I think our error count (on Saturday) was quite good, typically it has been too high and you just can’t compete at any level if you continuously give the ball back to the opposition.
It’s something we’re fine tuning, we’re trying to get that aspect right but it is coming, I think from the point of view of game management and set up we’re doing quite well. There’s always ways to improve and there’s always ways to develop the skills . that’s something that needs to be drip fed, we just can’t flood the pitch with that kind of stuff. It takes a while to get that right on the pitch and once you get certain things right you can move on and ask them further questions but at the moment we’re on a par with where we wanted to be. We just need to stick with it now, keep learning, put all the lessons we’ve had to good use.”
As for Saturday’s cross-channel trip, the Deise boss stated: “Going over to London, it’s a difficult one because of the travelling and everything that goes with a game over there. That said, we couldn’t be coming into the game in a better frame of mind. We’ll be looking for a good, solid performance, putting it up to London. If we can draw them on to us and stick to our guns and play good defensive football and break when the chance comes we’ll be there to thereabouts.”