TU Blanchardstown,
Dublin 1
WIT 2
It’s been a long time coming but after 20 years of waiting Waterford IT finally got their hands on the Colleges FAI Perpetual Cup for the first time since 1999.Two first half goals did the damage in the final against TU Dublin Blanchardstown at the Whitehall Stadium, the home ground of Home Farm FC.WIT were under pressure for most of the second half and conceded an early goal but the resilient Waterford side managed to hold out for a famous win. 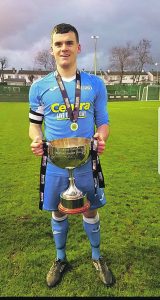 Waterford struck for the opener after 20 minutes.Shane Nolan finished his surging run into the Blanchardstown area with a quality strike past a helpless Colin McCabe.Waterford continued to dominate, helped by a strong win and the excellent Mark O’Keefe doubled their advantage eight minutes before the break with a classy turn and snap shot that flew just inside Mc Cabe’s near post. O’Keeffe has scored 45 goals for his club Hibernians this season and he certainly brought his shooting boots with him for this decider.
Blanchardstown reverted to three at the back after the resumption and piled on the pressure. They were rewarded a couple of minutes in when half time substitute George Mukete got a touch on to a Steven Ball in swinging cornet to beat Paul Martin from close in.Try as they might, the Dublin side couldn’t muster up an equaliser despite excellent efforts from Scott, O’Sullivan and Manley. WIT held firm and Paul Martin in goal and defenders Donal Smithers and Cormac Breslin produced outstanding performances while Man of the Match O’Keefe worked tirelessly as their lone striker in the second half.