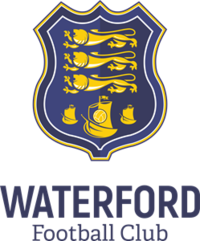 An under-strength Dundalk team, who were missing five of their top players including Michael Duffy, Robbie Benson and John Mountney proved to be far too powerful for Waterford FC in Oriel Park on Friday night last.
The hosts took the lead after just eight minutes and then turned on the style in front of almost 3,000 supporters. Blues boss Alan Reynolds made three changes to the side that drew with Bohemians at the RSC with Maxi Kouogun, Kevin Lynch and Aaron Drinan starting the game in place of Kenny Browne, Georgie Poynton and Cory Galvin.
Dundalk were on their game and could have opened the scoring inside the first minute when Jamie McGrath’s header from a Sean Gannon pass was inches wide.Dundalk took the lead through a moment of controversy on eight minutes.There were two balls on the field of play as Sean Murray sent in a cross to Patrick Hoban and he planted a free header past the static Blues keeper Hugo Keto.
The Blues had their first glimpse at goal on 31 minutes when JJ Lunney slipped the ball out to Zack Elbouzedi, who beat his markerbut his shot was saved by Dundalk keeper Gary Rogers at his near post.Dundalk doubled their advantage on 36 minutes when Sean Murray beat Hugo Keto with a neat right-footed shot from 18 yards. Izzy Akinade forced Gary Rogers into a smart save as the Blues tried to get something back before the break but his left-footed half volley was saved by the home keeper.
Hugo Keto produced a top save with the final action of a half dominated by Dundalk.Sean Murray sent over a corner kick from the right to the back post to Daniel Cleary and his header found Sean Hoare whose his close-range effort was brilliantly kept out.The incessant rain at the Co Louth venue didn’t dampen Dundalk’s spirits and Patrick Hoban had a chance to grab his second goal of the game on 48 minutes when he raced to the near post to meet a Sean Murray corner kick, but his volley flashed inches over the bar.Aaron Drinan nearly brought Waterford back into the game minutes later but his shot from 20 yards was superbly clawed around the posts by Gary Rogers.
The Blues had another chance when Zack Elbouzedi sent a cross into the danger area but Maxi Kouogun couldn’t connect.Dundalk added a brilliant third goal on 57 minutes. Sean Gannon picked out Jamie McGrath whose sublime pass caught the Waterford defence cold and when Daniel Kelly raced onto the ball, he powered a shot past a helpless Keto. Damien Delaney went close to pulling a goal back for the Blues on 70 minutes when he reacted quickest in the area to a Kevin Lynch left-wing delivery, but his effort at the near post went over the bar.Dundalk scored a fourth goal in injury time when Cameron Dummigan drilled a right-footed shot past Keto to seal the deal.