Ladies Football League, Division 1
Mayo 0-6
Waterford 0-2
Waterford’s Senior Ladies Football team braved the elements in Swinford on Sunday afternoon last but made the long trip home empty handed as they suffered a second defeat in this year’s National Football League against a Mayo side that had beaten Donegal and lost to Dublin in the opening fixtures.
The facilities and underfoot conditions in Swinford were second to none, but the wicked wind, biting cold and watery sunshine made it very difficult for the players as Mayo battled their way to a crucial win. 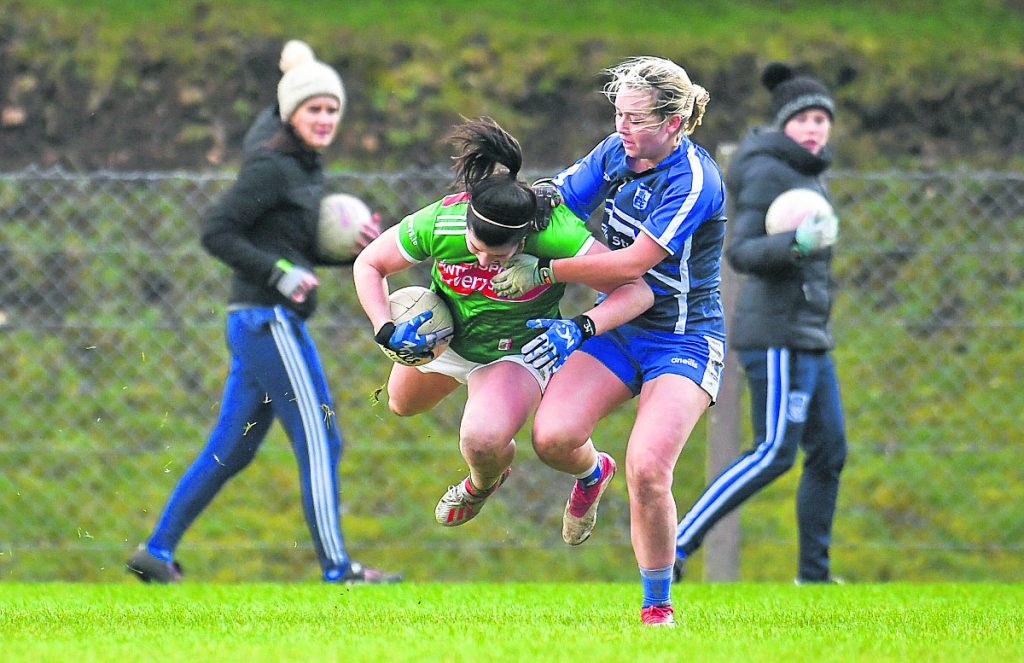 Rachel Kearns of Mayo in action against Megan Dunford of Waterford during the Lidl Ladies National Football League Division 1 Round 3 match at Swinford, Co Mayo

Waterford played with the aid of the gale in the opening half but failed to make it count on the scoreboard as Mayo dominated possession. Rachel Kearns who top scored for the Green and Red opened the scoring when she put over a free. Caoimhe McGrath, who is one of the longer serving players in the current Waterford panel, equalised for Waterford but Kearns restored the home sides lead when she put over from play. Waterford however went in for the break on level terms when Chloe Fennell split the uprights from a free.
Waterford, playing against the howling wind in the second half, played better than they did in the first half but found it very difficult to kick into the wind.
Sinead Cafferky gave Mayo a slender advantage early in the second half, and two points from Kearns left three between them, 0-5 to 0-2, before the heavens opened and referee Siohhan Coyle, rightly took the players off the pitch in the middle of the hail storm.
When the players came back on after their unexpected calling off the field Natasha Gaughan secured the win for Mayo when she put her side four up with seven minutes remaining.
Next up for Waterford is a home game against Tipperary this coming Sunday where a win for Waterford could go a long way towards securing their place in Division One again for the 2021 league.