Storm Dennis caused havoc with the weekend’s fixtures with Waterford’s trip to Limerick first postponed from the original Saturday afternoon slot to Sunday afternoon before eventually being cancelled altogether.The Waterford hurlers were already on the team bus waiting to depart on Saturday afternoon when news of the postponement came through and again on Sunday morning plans had to be hastily rearranged with the team diverting to Clonmel Óg’s GAA grounds for a training session when the late decision made at around 10.15am that the game was now cancelled altogether.

The Tipperary versus Galway game due to be played in Pearse Stadium Salthill was cancelled early at 9am on Sunday morning. The fact that an official ‘Orange’ weather warning was in operation in both Limerick and Galway should have resulted in both games being cancelled much earlier.Even if the grounds were deemed playable the safety of supporters travelling to the venues should have meant a much earlier decision with regard to cancelling the games.
I believe if there is an ‘Orange’ (or indeed Red) weather warning in place that all games should be cancelled as a matter of course in the interest of everyone’s safety, players and supporters included.

I imagine the cancelled games will be rescheduled to the end of the league campaign with the knock-out stages being put back a week. This would also most likely mean the hurling league being played a week later than scheduled, possibly as a double-header with the Division 1 football league final.All of this may have knock-on effects on local club fixtures should Waterford make it all the way to the league final.I have to say the Colleges Camoige played at WIT Carriganore last weekend also defied logic. The excellent Waterford venue hosted the Ashbourne, Purcell and Fr. Meagher Cup competitions over the weekend. The weather, particularly on Saturday, was not fit for any sort of games and I would question the decision taken by the organising committee for allowing games to be played in such conditions.
With driving rain, cold, record level wind and gusts the safety of players in my opinion was compromised. Again there was an official ‘Orange’ weather warning in operation last Saturday in Waterford yet the games continued.

I appreciate the amount of work involved in the organising of such an event and the associated costs endured by all the visiting teams however is not good enough to for the want of a better phrase to ‘chance it’ and hope it all goes ok. Thaankfully there were no serious injuries recorded but risks are being taken in such conditions. The games I witnessed were a complete lottery.Again if there is an official weather warning of such magnitude then all games should be called off. Why risk player’s welfare or indeed the welfare of those travelling from all over the country to the venue in such hazardous conditions? 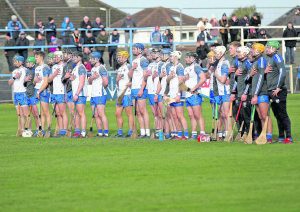 Laois manager Eddie Brennan described how his players had to take hot showers at half-time of their league game against Clare in Ennis to get some feeling back into their bodies. Where was the GPA (Gaelic Players Association) over last weekend? We need to protect our amateur players and always err on the side of caution.There are learnings for all associations after the past weekend with regard how to deal with weather events. Earlier decisions are required and during such weather warnings cancellations should be mandatory. No if buts or ands.
Maybe it’s just me but we do appear to be suffering more weather events than in past decades. Maybe this auld ‘Global Warming’ thing is more prevalent than I imagined. That said fixing games in the months of December, January and February were always fraught with danger. Close season anyone?

The net effective is that Waterford will welcome Galway to Walsh Park this Sunday for their league game, in round four, with their 100 per cent record still intact. Manager Liam Cahill had announced six changes from the victory over Westmeath for the round three game against Limerick which was eventually cancelled. Stephen O’Keeffe, Calum Lyons, Kevin Moran, Conor Gleeson, Captain Pauric Mahony and Jack Prendergast all set to return to the starting line-up. It remains to be seeing if Cahill remains loyal to the team announced for the Limerick game or if plans to tweak it slightly with Galway in mind.

Perhaps last weekend’s postponement may actually work in Waterford’s favour. Galway didn’t look too hot in their last outing which was a comprehensive defeat to Limerick at the Gaelic Grounds and under new management the trip south east may appear challenging against the unbeaten home side. Both Jamie Barron and Austin Gleeson too will have a further weeks training under their belt and are very likely to feature at some stage this Sunday. A third win in a row will keep Waterford in pole position to qualify for the league knock-out stages with games away to Tipp and Limerick to complete their fixture list. Sunday should be another great occasion with Joe Canning and co in town. Home advantage is more important now than ever and ‘Fortress Walsh Park’ may just tip the balance in Waterford’s favour in this one.
Waterford v Galway this Sunday 2pm at Walsh Park.