“It's still very sore for everyone here.” Lee Power

LOI Premier League Preview
Ahead of the new season Waterford FC owner Lee Power gives his views on a range of issues including last season’s Europa League debacle. It’s been just over three years since Lee Power became the owner of Waterford FC. In that time the club won the First Division and then finished fourth in their first season in the Premier League.
Last week he spoke with Paul Fennessy of “The 42” about the clubs Europe League controversy last season and his support for John Delaney and why he thought about pulling the plug on WFC.
The investment from Power, a former Norwich and Ireland underage footballer turned businessman, boosted the club both on the field and off.The Blues thought they had secured European football ahead of the 2019 campaign but were controversially replaced by St Patrick’s Athletic after contravening UEFA’s licensing rules.Power took the case to the Court of Arbitration for Sport but was ultimately unsuccessful in his bid to challenge this decision.
The setback had significant financial consequences. Last season, there were rumours Power was considering pulling out, but the chairman subsequently confirmed he would continue to finance the club.
The Londoner, who has family from Waterford, admits he is still reeling from the club’s Europa League exclusion, nearly a year after the news was confirmed.
“I don’t think it would have happened in any other country,” he tells The42. “That’s the downside of Irish football and probably the state that it’s in at the moment.
“Not for me just financially, but to all the supporters, the staff that worked so hard, to take that away from them I thought was disgraceful. 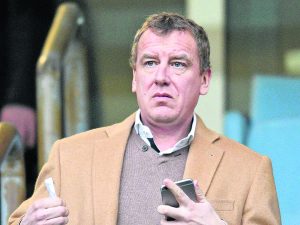