Home » Sports » Soccer » Graham Cummins. “You are more or less self-employed in England.”

Graham Cummins. “You are more or less self-employed in England.”

LOI Premier League Preview
Graham Cummins began his League of Ireland career with Cobh Ramblers in 2006. He scored 17 goals in 77 games for the Rams. Stephen Henderson, who was the manager of Waterford United at the time, brought him to the RSC in 2009 and although he was signed as a central defender Henderson decided to move him into a striker’s role and he netted 17 goals in 28 appearances.
The following season his signed for his native Cork City and during his two seasons at Turners Cross he bagged 42 goals during his 62 games for the Leesiders.
Preston North End came calling and from 2012 to 2014 he found the net four times during his 34 games for Preston. He was loaned out to Rochdale where he played 27 games. In season 2014-2015 he signed for Exeter City and played 34 matches for them scoring four goals. He moved to Scotland and signed for St Johnstone and during seasons 2015-2017 he lined out for them on 77 occasions and despite playing in defence for a lot of those games he scored 14 goals. 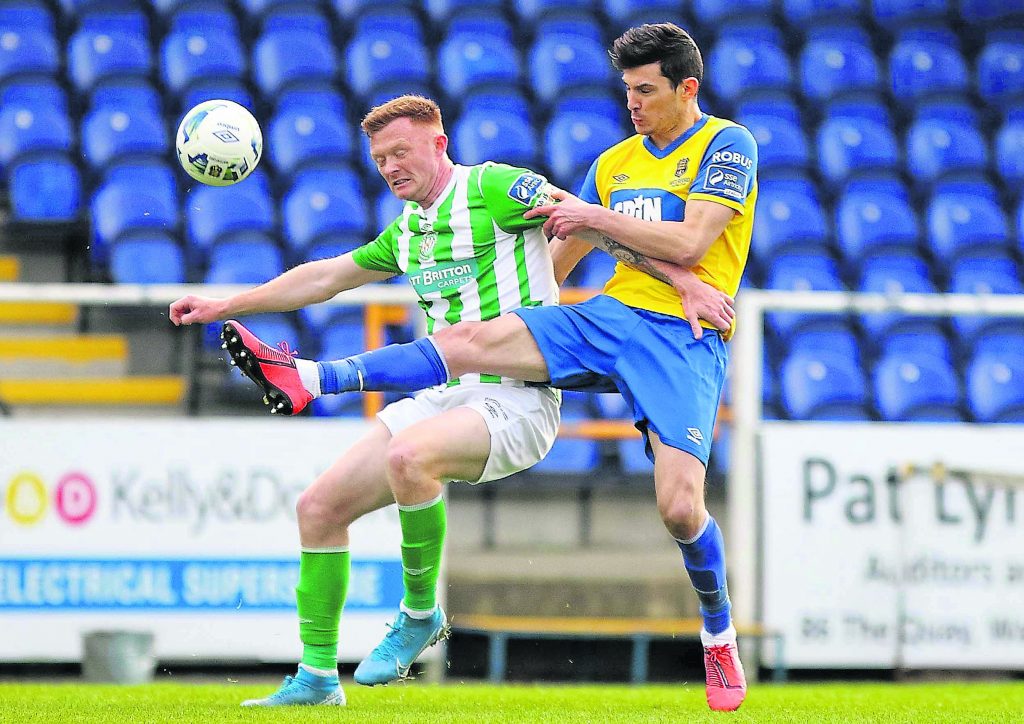 Waterford FC’s Graham Cummins getting the better of Bray Wanderers Gary Shaw during the pre-season friendly at the RSC.

He returned to Cork City following his stay in Scotland and played 52 games for City, scoring 18 goals in seasons 2017-2019. During the second half of 2019 he went on loan to Shamrock Rovers and netted three goals during his eight games for the Hoops. A few weeks ago he came back to the RSC and the 32 year-old spoke candidly about his career and his decision to become a Blue once again. “I am thrilled to be back here once again. I was never going to stay in Dublin because it was not feasible for me and my family. Just before the end of last season I sent a text to Alan Reynolds and told him I would love to come back and sign if he thought I could do a job for the club. The League of Ireland is small when it comes to the number of players who play in it and lots of them told me it was a great club with a very good atmosphere within the group of players who sign for them. I started off with Cobh Ramblers as a centre -back and when ‘Hendo’ (Stephen Henderson) brought me to Waterford he played me in that role but after a little while he moved me up front.
It wasn’t my decision, but it worked out fine. During my discussions with ‘Rennie’(Alan Reynolds) I informed him that centre-back is probably my best position but having said that I am not ruling out the possibility of playing up front again if necessary. I was not enjoying my football for the past few months but already I have got my desire once again since I have come back here. It’s great here. I have enjoyed the training and the pre-season games and like all of the lads I am buzzing ahead of the opening game against St Patrick’s Athletic.”
Life in Britain
When Graham moved to Preston North End in 2012 he did not know what to expect as he outlined last week at the RSC following a training session. “I would describe my career across the channel as decent rather than extraordinary to be honest with you. I did not play as often as I would have liked but nevertheless I made a decent living over there. I was old enough at the time (24) but I was naive because I was moving from a part-time game to a full-time game and that is a huge step in professional football. In England I discovered that you or more or less self-employed. The players at the clubs regard you as their opposition on the training ground because they think you are there to take their place. In many ways they are your competitors.
Thankfully I had my wife with me and when I moved to Scotland where I enjoyed it very much because the players and the people were friendly and welcoming.
“We got on very well in Scotland. Everything in the garden is not rosy for players going over to Britain and young players do find it tough. There are players of course who are gifted and they get on fine which is great but others like me at the time did and can find it tough”.
Graham is looking forward to next Friday’s match against St Pat’s in Inchicore. “It’s always important to get off to a good start. The same goes for clubs like Dundalk, Shamrock Rovers, Finn Harps and all of the teams in the league. Stephen O’Donnell has brought in a lot of top class players to add to the ones he had last season. I was very impressed by them when I played with Shamrock Rovers against them at the tail end of last season. That said we have an honest group of players at this club and although very few will give us a chance we will give it everything we have got. We have a young squad and already they are calling me granddad which is funny because I am only 32 years old.
I suppose younger people would not remember the Irish international Gary Doherty. He played for a lot of clubs and of course for the national team both as a centre-forward and centre-back. It did not matter to him where he played and that is how I feel now. As long as I am in the team and doing the best for my teammates and my manager that is all that matters” concluded the affable Cummins.