Toughest Test To Date For The Deise

An away trip in the Allianz National Hurling League Division 1A is never easy, but a trip to the Gaelic Grounds is up there with the hardest of the lot. Liam Cahill’s Waterford will head to Limerick at the top of the pile in the Hurling Leagues, having seen off the challenges of Cork and Westmeath in recent weeks. The Deise have impressed with the hunger and resilience they have shown to date, but in truth the tests they have faced in earlier rounds will not have been as complex as the opponent which they face this weekend.

Limerick, the 2018 All-Ireland Champions and reigning Allianz National Hurling League kings have also started their season well. John Kiely’s men trailed Tipperary by nine points at one stage, and still managed to surmount a wonderful fightback to win that clash of the titans. They also impressed in their last home clash, by swatting aside Galway on a 1-19 to 0-14 scoreline.

The new men have made serious impressions for the Deise – the players and the management. Iarlaith Daly of Lismore hasn’t looked out of place at all at the top level, impressing particularly against Cork, while Neil Montgomery of Abbeyside has also been excellent – contributing greatly to UCC’s Fitzgibbon Cup semi-final win over DCU at the weekend with two late points. Jack Fagan was also lively versus the Rebels and raised a green flag in Cusack Park. 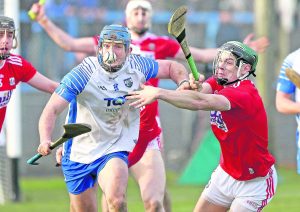 Dessie Hutchinson hasn’t quite yet hit the heights he did at club level last campaign as of yet, but is still adapting to a different style of hurling. As the weeks go on, expect the Ballygunner man to return to firing on all cylinders.

The old faces have also been excellent; despite their youthful exuberance. Stephen Bennett, Patrick Curran, Conor Prunty and Calum Lyons have been wonderful so far and seem to be benefiting from the hard yards put in on the training ground. Kieran Bennett has also been outstanding, with Cahill spoiled for choice to date in most areas of the field.

Limerick are a different level of challenge however, and an incredibly tough side to beat. The Shannonsiders got the better of the Deise in last year’s final as well as in the Munster Championship, so there will be a vendetta for revenge to be exacted in the Waterford camp.
Many have tipped Limerick to be thereabouts in the Liam McCarthy argument once more this year, whereas despite their potential, Waterford are a side who haven’t won a Championship game since 2017. Expect a tense, right and ill-tempered affair at the Gaelic Grounds on Saturday night at 19:00, with the game live on Eir Sport. The bookmakers have Liam Cahill’s side at 5/2 – and that might be worth a punt.