Not all Doom and Gloom for Waterford Football

Waterford’s one-point loss to Wexford was a bitter pill to swallow. Benji Whelan’s men were at times the better side, and had plenty of opportunities to take the advantage, but in truth, foul weather scuppered any chance either side had of playing their usual style of football.
The loss now makes it three successive defeats for the Deise – having lost out to Limerick and Wicklow prior to Saturday evening’s clash with their neighbours.

Promotion hopes now lie in shreds as the team face a mountain to climb in order to achieve anything, with a tricky test to Sligo on February 22nd now crucial even in terms of keeping morale up within the camp. However, you’d be mistaken if you thought it was all doom and gloom for Waterford football. 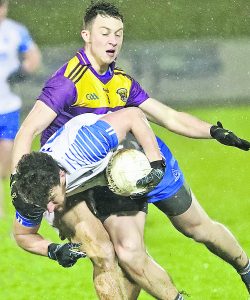 The spine of the Waterford side is comprised of a lot of young players whose best days are inarguably ahead of them. Captain Conor Murray has been excellent, his agility and technical ability often light up games that cry out for a piece of individual brilliance.
Despite his young age, he has proven he can provide such in the past, and no doubt he will do so in future.

Darragh Corcoran of St Saviour’s has also been very impressive in the League campaign to date, scoring the only goal in Wicklow, playing very well versus Limerick and proving the catalyst in Saturday’s treacherous conditions.

Other players are more than capable of mixing it at any level, the vast majority of the panel being made up by the Rathgormack contingent, who were incredibly impressive when capturing the Senior County Football Championship title. Kilrossanty’s Donal Fitzgerald looks a great player of the future, while the An Rinn representatives have impressed, with The Nire also providing some great players in Dylan Guiry & Dermot Ryan.

There is certainly plenty of potential for the management to work with in the ranks, and the ingredients for success are evidently there. Waterford have far from faltered in their performances to date in this campaign, but the lack of an out-and-out goalscorer has been apparent.A strong finish to the league season will be the aim for the Deise now, given that promotion looks out of the question. Games to come against Sligo, London, Carlow and Antrim will provide good opportunities to lay groundwork for the Munster Championship.
This team may be down in the dumps at present, but when at your lowest, the only way is up – and they’re certainly capable of going there.