Wet and Windy Woe for Waterford

Storm Ciara did her best to provide Wexford with a hostile reception to Fraher Field, but it was the Yellowbellies who prevailed in horrendous conditions, winning out by one point to twist the knife in Waterford’s already fleeting promotion hopes. The home side put up a valiant effort, but it came to little avail. Darragh Corcoran was the star man for the Déise, and after a swift passing move it was the Saviours man who laid it on for Corey Kennedy, who lit up the scoreboard for the first time on the night. It was swiftly followed by a skilful effort from Conor Murray who produced his trademark outside of the boot effort to add his first of the game. The visitors grew into the clash despite Waterford having ‘the better’ of the elements, with goalkeeper Ivan Meegan slotting over two well-taken frees to bring Paul Galvin‘s side level.

The former Kerry star has his side well-drilled in defence, as they turned over the world of ball in the opening proceedings, pressing the home team into mistakes and capitalising on the counter. The big breakthrough came along in the tenth minute, with Glen Malone releasing Ben Brosnan in behind, and with work still to do, the Castletown forward drove the ball at goal, with it nestling in the top left corner to further extend a deserved advantage.

A Jason Curry free kept Benji Whelan’s men ticking over, but the threat was always there when Wexford managed to get the ball in around the Waterford area, the visitors cursing their luck as Sean Nolan’s effort grazed the upright following some clever play from Brian Malone, on what was remarkably his 164th appearance in purple and gold colours.

The Deise remained patient and closed proceedings to within one when Jason Gleeson became the latest member of the Rathgormack contingent to split the posts. The conditions were beginning to become a real dampener, in all regards, on the tie, but from nothing, Murray slalomed through the defence and dropped over a speculative effort that clipped the bar on its way over, as his side’s resilience was rewarded with the scores reaching five apiece.
Wexford were solid in defence and proved tough to penetrate, but struggled to get into the positions from which they could hurt their opponents. 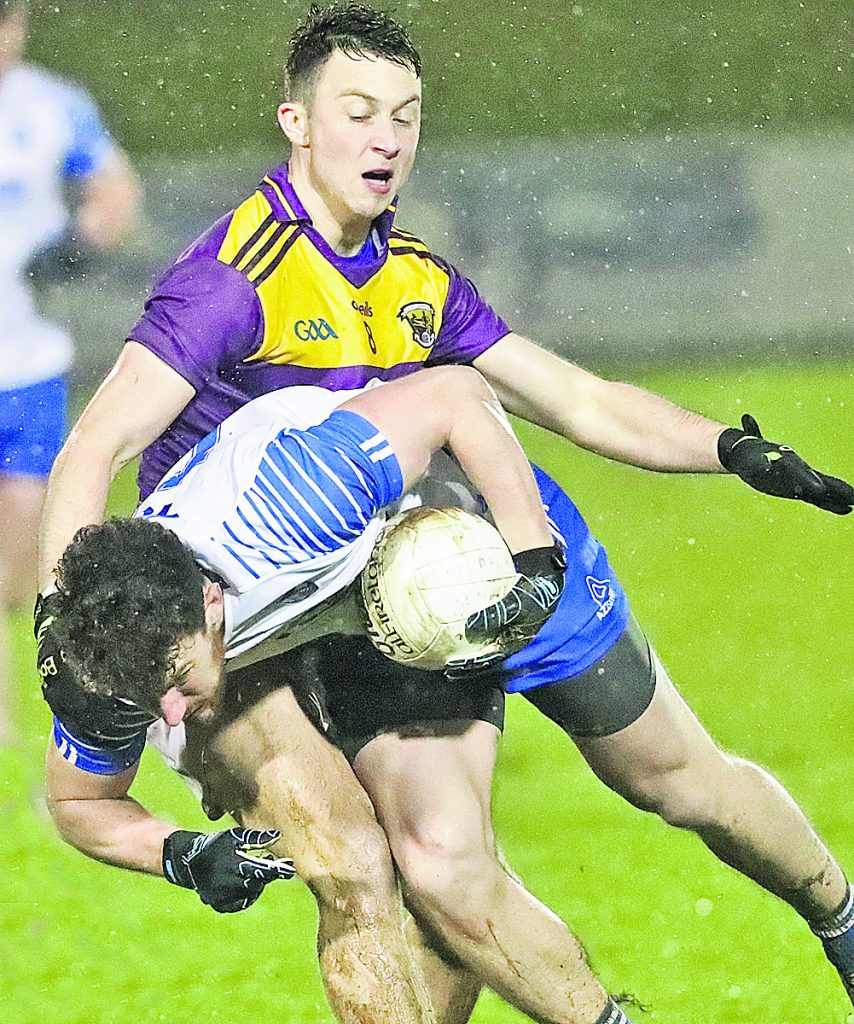 Niall Hughes chanced his arm successfully over the shoulder, and after their first score in 21 minutes, Wexford greeted the halftime whistle with a 6-5 lead. Referee John Ryan gave the pitch a thorough inspection at the interval as the rain began to pepper the playing surface, but the teams emerged for the second half in spite of this. With conditions making the ball like a bar of soap, an early second half goal was the killer, as Wexford put the tie to bed, albeit unknowingly at the time. A moment of ill judgement from Deise ‘keeper Paudie Hunt presented Wexford with a glorious opportunity, from which Hughes duely obliged, the Kilanerin man raising the second green flag of the evening.

Credit to Waterford, they were dogged in their determination to engineer a fight-back but the ball quite simply would end up anywhere but in the net, as it was turning out to be one of those days in front of goal. On another evening, it’s arguable they created enough chances to have comfortably won the tie, but given the awful conditions, fine margins proved all the more important.

Donal Fitzgerald made a notable difference upon his entry into the fray, and when Darragh Corcoran kicked over the game’s first score for almost twenty minutes, faint hopes of a comeback were re-ignited. Conor Murray produced another trademark burst, and with Jason Curry slotting over another placed ball, out of nowhere, there was a single score between the sides with just minutes left to play.

Waterford threw the kitchen sink at their opponents, but the chance to level the game never seemed to circulate, with the staunch Wexford rearguard prevailing to hold out for a one-point victory. It was a spirited performance from Benji Whelan’s men, but once again, they were denied victory on a night where it was there for the taking.

Three defeats from three means promotion is now surely out of the question for Waterford, while Paul Galvin will be impressed with his side – who are still certainly in with a shout of climbing to Division Three for 2021. Next up for Waterford is a tricky trip to Sligo on February 22nd, while Loch Gorman will host London on the same weekend.

It’s back to the drawing board for Waterford, but not all doom and gloom. There are clear indications that the ingredients are there for relative success, the matter of finding that recipe is what’s proving a conundrum.