Home » Sports » GAA Football » Deise go back to back!

Deise go back to back!

National Football League Division 4
Waterford 1-9
Antrim 1-8
Tony Ryan at the WIT Arena
Despite playing in defence, the Nire’s James McGrath is prone to scoring the odd point for club and county. Well, he may never kick a more timely and important score than the one he contributed in the fourth and final minute of added time in this Round 4 Allianz NFL game in Carriganore last Saturday afternoon.The teams were level at 1-8 a piece for the previous nine minutes before Waterford’s most outstanding player on the day ensured a second NFL win for the Déise and also a second consecutive one.
Fifty-two minutes in, a Ryan Murray pointed free eased visitors Antrim into a 1-8 to 0-6 advantage. However, it proved to be their last score as Waterford dominated the remainder of this match, scoring 1-3, to deservingly take the honours at a wind-swept and cold WIT venue. 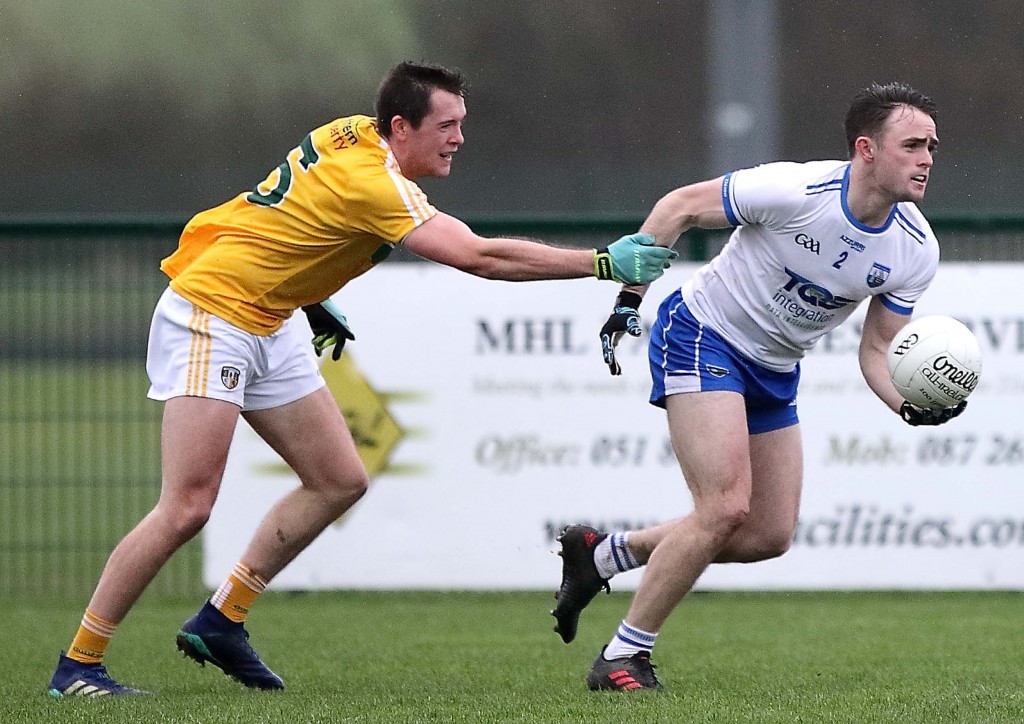 Waterford’s Sean O’Donovan is dragged back by Antrim’s Ryan Murray.

Waterford’s greater levels of fitness told in the final period of the game and their spirits were revitalised when Dylan Guiry lashed home a 57th minute goal from a JJ Hutchinson pass. Corner back Seanie O’Donovan from Modeligo added a minor immediately and the sides were level after James McGrath and Joe Allen combined to send first half sub JJ Hutchinson through for his second score of the day in the 56th minute.McGrath’s winning point was greeted enthusiastically by the team’s loyal band of supporters huddled in the stand and this victory now places the county fifth on the league table, on the same points total as third and fourth placed Limerick and Wicklow with just the slightest inferior scoring difference.
Waterford had first use of the strong wind and Ballinacourty’s Sean Whelan Barrett continued his league long scoring contribution with the opening point after just 30 seconds. Antrim’s Patrick McBride was the star of the show early on kicking three fine points from play and looking as if he could win this match on his own.The home team received a set-back early on when Stradbally’s Shane Aherne was forced off injured after just seven minutes but even by this stage he had shown that he was returning to his old self in a county jersey. Dungarvan’s Joe Allen replaced him and he went on to play a major part in the Deise second half revival.
Antrim were playing the more direct football throughout the first half and, unlike the home side they had more of a presence in the forward area and kicked for scores and every given opportunity. As well as McBride, midfielder Martin Fitzpatrick dissected the posts from play while a brace of pointed frees by An Rinn’s Fearghal Ó Cuirrín kept Benji Whelan’s charges in touch come the 18 minute mark at 0-4 to 0-3.
The winners came more into the game in the remainder of the first half, accounting for three of its four scores. Dylan Guiry levelled the game at 0-4 each in the 26th minute after good work by O Cuirrin and James McGrath before Odhran Eastwood edged the Glensmen back in front five minutes later.Four minutes of added time were announced and it was in this time frame that Waterford earned their interval advantage via points by Tommy Prendergast and the recently introduced JJ Hutchinson, the latter score again assisted by James McGrath. The home side should have enjoyed a greater advantage going in at the break but two Sean Whelan Barrett efforts fell short and Fearghal Ó Cuirrín was wide with a final effort.
Antrim took the initiative in no uncertain terms from the restart. They scored 1-3 without reply as Waterford remained scoreless for all of 22 minutes. The Déise tactic of keeping the ball around the centre of the field and playing it back more often than forward kept them very much on the backfoot as Antrim’s more direct style of play again paid dividends.Patrick McBride levelled the match in the 40th minute for the fifth time with his fourth and final point, thereafter not getting a sniff from James McGrath.
Matters got worse for Waterford when a Ryan Murray delivery was palmed into the net by Stephen Beatty two minutes later 1-6 to 0-6 and Waterford’s only reply was two wides by James McGrath and a JJ Hutchinson free effort.
Antrim looked to have made their long journey south worthwhile when Colum Duffin and Ryan Murray kicked scores in the 52nd minute to put 0-5 daylight between the teams at 1-8 to 0-6.At this stage it was difficult to see Waterford making a worthwhile comeback and Antrim not scoring again but this was the case. Ruaiir McCann scoffed a 55th minute decent goal chance which would have put the game to bed and then totally unexpectedly the game turned Waterford’s way.Waterford took control of proceedings in general play and on the scoreboard. Antrim tried to disrupt this after Dylan Guiry’s goal and Sean O’Donovan’s point when attending to a player and introducing two subs in the 64th minute. It worked well as Waterford lost their momentum for a while and returned to keeping the ball in the middle of the field and playing it backwards.
Yet, their fitness levels against the strong wind had Antrim in trouble and Waterford sniffed the win and went for it. Hutchinson’s 65th minute leveller was followed by a Tommy Prendergast wide in the second of the four minutes of added time. It may have looked as if the chance of a second win had dissipated but the hero of the hour James McGrath lofted over his winning point into the wind that any Kerry footballer would be proud of.Waterford’s next game is away to London on March 16th .