All-Ireland heartache for Déise women
There was no fairy tale finish to the sixtieth anniversary celebrations at Gailltir Camogie Club as the Waterford champions went under to an experienced Clonduff side from Down, who had the minimum to spare in the All-Ireland Intermediate Club Camogie Final at Croke Park on Sunday. Right around the country games were called off on Sunday due to atrocious weather conditions and while there were difficulties for both sides at Croke Park, the players deserve great praise for lining out. 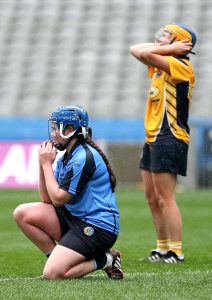 Tears of sadness and joy at the final whistle as Gailltír Aoife Fitzgerald sinks to the ground.

The Down side, who like Gailltir in Waterford came through to contest this final after winning the senior decider in their own county, had experienced team captain Paula O’Hagan to the fore. She hit six of her side’s scores, all from placed balls, while the Carr sisters, daughters of former Down star Ross Carr shared the remainder of their sides total. Annie Fitzgerald, who impressed throughout the campaign, finished as top scorer for her side with seven scores, six of which came from placed balls, while teenager Clodagh Carroll and the vastly experienced Áine Lyng also got on the score sheet for the ladies from the barony.
Clonduff got off to a fantastic start and raced a five point lead with eleven minutes on the clock. Gailltir however came roaring back over the next twenty minutes and at the break they were only two behind. Gailltir however were unlucky not to have gone in at the break in front as Annie Fitzgerald won her side an injury time penalty but Áine Lyng saw her effort smothered on the Clonduff goal line. Gailltír more than matched Clonduff in the second half and although Aine Lyng put over a free in the first minute of added time to reduce the deficit to just a point, the Waterford side could just not edge in front.
Time ran out on Gailltir and although the side will be disappointed with the final outcome, this is a young Gailltir side who are going places. Many of the players are young enough and the experience gained from Sunday’s narrow defeat should stand them in good stead if they can return to Croke Park, sooner rather than later.