Déise near exit after Tipperary trimming

Brian Flannery at Semple Stadium
Waterford’s Championship credentials suffered irreparable damage following an 18-point defeat to Tipperary at Semple Stadium on Sunday last.Having lost their opening game to Clare just seven days ago this second successive defeat accompanied with a considerable negative score difference sees Waterford on the brink of another early season exit.The dismissal of Conor Gleeson on the brink of the 30th minute for a second bookable offense proved a turning point although Waterford already trailed 0-14 to 0-6 by that stage. Tipperary, who shot 2-28 against Cork in their opening round victory again proved that when they are in the mood they possess the most potent forwards in the game and are once again title contenders. 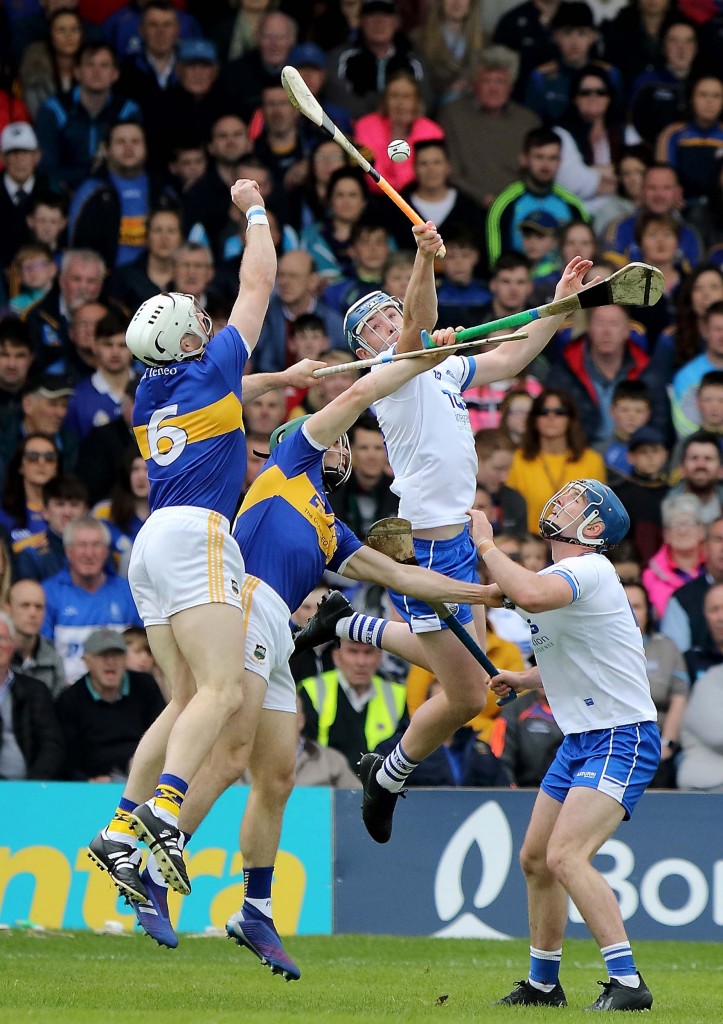 Manager Paraic Fanning made four changes to that starting line-up with Calum Lyons, Thomas Ryan, Jack Prendergast and Patrick Curran all returning to the starting XV. Conor Gleeson was also reassigned to sentry duty in front of the Waterford goal with Kevin Moran switched to centre-field from the throw-in.From quite early on it was apparent that Waterford were struggling to match the pace and precision of the Premier men. John O’Dwyer, John McGrath, Jason Forde and Michael Breen all looked untouchable with their markers unable to keep them under wraps. When midfielder Michael Breen shot his third point of the game in the 27th minute Tipperary led by 0-13 to 0-6 and looked like they just couldn’t miss, with sidelined points from Jason Forde and Ronan Maher the highlight of a Blue and Gold dominated opening period.
Gleeson was dismissed moments later when the Fourmile man hauled Patrick Maher to the ground to deny the Tipp man an obvious goal scoring opportunity. Jason Forde converted the resulting 20-metre free and Waterford fond themselves eight points adrift and a man down.
Last first half points from Austin Gleeson and Pauric Mahony (2) reduced the margin to six points at the break. However, it might have been even closer had a Patrick Curran goal effort in first half injury time managed to hit the net rather than a post. The odds though were firmly stacked against the visitors, who trailed by 0-16 to 0-10 at the interval.
Waterford battled bravely on resumption and had narrowed the margin to just three points (0-20 to 0-17 by the 51st minute with debutant Calum Lyons and the inexperienced Conor Prunty both excelled in an over-worked defence.
In attack, Pauric Mahony led the charge with five points in the third quarter to add to fine individual scores from Thomas Ryan and Austin Gleeson. Noel McGrath replied landing a point from play to calm the nerves of the home supporters among the 22,833 gate to extend their advantage to four points. But a four-point advantage was soon to become seven. Patrick Maher collected a puck-out and precision passes from Maher to Callanan, to O’Dwyer found an unmarked Jason Forde who finished low to the net for Tipp’s opening goal to send them 1-21 to 0-17 clear after 54 minutes.This score seemed to flatten the Waterford challenge and despite running the bench, the visitors faded completely over the closing stages.
Indeed, Tipperary outscored their Munster rivals 1-9 to 0-1 over the remaining 16 minutes of normal time and five minutes of injury-time. Seamus Callanan hit goal number two in additional time following Jason Forde’s assist to send Liam Sheedy’s men top of the Group and already one foot in the All-Ireland series. Waterford have remaining games against All-Ireland champions Limerick (June 2nd) at Walsh Park and away to Cork (June 8th).