Deise's Football Crisis All Too Real

Will anyone stand up for our second code’s future?
“The man who is afraid to risk failure seldom has to face success.” – Coach John Wooden
So who will be the GAA figure in Waterford who decides, once and for all, that we will have a fully resourced commitment to football?
Who will put in place a co-ordinated strategy from Under-14, through to 16s, Minors, Under-20s and onto the Senior grade that will do something fundamental in terms of improving the county’s second to last standing in the national rankings?
Because settling for the status quo belittles any youngster who genuinely wants to play inter-county football for Port Lairge.
The status quo, alas, has been in place for as long as this reporter has been on the Gaelic Games beat, and I for one am fed up with essentially re-working the same piece every 12 months lamenting the state of the less regarded code in this county.
Yet sadly, I’ll hazard a guess and suspect that the momentum that has to and ought to come from the county’s clubs, first and foremost, will not materialise between now and December’s Convention at Lawlor’s. And before anyone talks about brick-batting the County Board, whom, nonetheless, I’d be delighted to see taking a lead on this issue, in the absence of pressure from the clubs to demand change, that necessary change is unlikely to happen.
While, and to the ire of some hurling-obsessives in that county, Tipperary has made tremendous footballing progress in recent years and with Carlow the talk of the football world this Spring, the game in Waterford isn’t even standing still. It’s firmly in reverse gear. 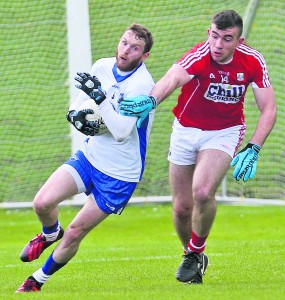 Waterford’s heroic Munster Championship showing against Cork last year suggested that more consistent, competitive performances are within the Deisemen. But the game in this county needs a sustainable plan to make a brighter future possible. | Photos: Sean Byrne

Sadly, as the past 10 or more years at underage level illustrates, there’s no sign of real and acknowledged improvement coming any time soon, a point which depresses me as a long-standing football fan. In many ways, this sentiment echoes how Waterford FC fans felt for so much of the past decade, but with no Lee Power-like figure on the horizon for Gaelic Football, the impetus to revitalise the code, right now, simply isn’t there.
And in an atmosphere where even Croke Park appears to care little for fulfilling National League fixtures at the lowest level, the feeling that the rot is already taking hold among the have-nots of the inter-county game is proving difficult to discard.
Name calling or blaming will do nothing to improve and promote football at inter-county level, but perhaps the following might be considered by those who will manage our underage hurlers and footballers in 2019.
1: Appoint the same physical trainer for both minor panels. With a certain level of overlap between minor panels a given, there should be joint physical training sessions for both codes, so the panels should share a physical trainer. This should be a pre-requisite to any appointment/re-appointment sanctioned by the County Board and would mean both minor managers sit down together before pre-season begins to co-ordinate physical training sessions. This would also surely mean a saving for the Board when it comes to floodlight use, mileage expenses, etc. It’s worth pointing out that Minor Football Manager Tom Flynn floated this suggestion during a conversation over the weekend.
2: Encourage players to play both codes. Youngsters are specialising far too early across a range of sports, in my view. If someone wants to play both hurling and football for Waterford, that door should always remain open. The players’ enjoyment ought to be paramount. Happier players generally handle pressure better and should never have to make a decision based on a potential ultimatum which parents are as likely to issue as a manager or a selector. The fun is being sucked out of sport way too early nowadays. I’d also be of the view that any hurler ranked 28 to 35 in a senior panel pecking order should be free to play with the senior footballers, at least during the Spring. They’d surely build up more game time playing football in the League than they would sat in the stand during a hurling fixture. And you’d have to wonder if joint senior training sessions would also serve to boost our footballers’ morale every winter.
3: Resource football and set targets. Waterford shouldn’t be resigned to playing Division Four football. Waterford shouldn’t be resigned to two Championship matches a year. But the momentum required to get us out of our current rot needs resourcing, planning and time. A Director of Football/Football Development Officer, who comes from a successful inter-county background, should be appointed to co-ordinate a plan which runs from Under-14 up to Senior and be given a minimum five-year term (subject to renewal) to get things moving. Someone like Tomás Ó Sé, stepped in the culture of the game, springs to mind. Yes, that requires money. But anything worth trying is worth investing in, and surely one of our national sports is worthy of that.
In 134 years, Waterford’s hurlers only outscore our footballers 2-0 in terms of All-Ireland wins. Waterford must not derelict its duty to football as Kilkenny have. And if we truly want to remain regarded as an all-round GAA county, then we have to do something radically innovative when it comes to our footballers.
Because, as results and near institutional panel cry-offs indicate on almost an annual basis, the way things have been done largely up to now simply hasn’t worked. So let’s try something new. As John Wooden put it: “What is right is more important than who is right.”
If you have any views on what you feel ought to be done for Gaelic Football in Waterford, we’d love to hear from you. Please email your opinions/observations to dkeyes@munster-express.ie