Tramore lift FAI Youth Cup after dramatic Ozier finale
Matt Keane at Ozier Park
Ozier Park has staged many memorable games since it opened in 1924 but it would be fair to say the famous venue has never actually hosted a game like this one.
This contest had simply everything and every single player and spectator of both clubs were out through the ringer in what was an extraordinary 110 minutes of blistering football. 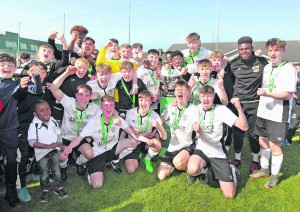 Tramore players and mentors celebrate their victory over St. Kevin's Boys in the FAI Junior Cup

The match swung from one side to the other all through and when the final whistle was blown it was the victorious Tramore team who danced with joy on the hallowed turf of Waterford’s oldest football ground. Last season the gifted Seagulls won the FAI Under-17 Cup Final in Turners Cross and here they were again lifting yet another national trophy. No one no matter how gifted the players are, no-one may could possibly write a script like this.
Quite simply it was totally beyond belief. To win two national titles within the space of 12 months is incredible and the manner in which they did it was also amazing.
Tramore went two up inside the opening 23 minutes and then they found themselves trailing 3-2 on the hour mark before equalising late on to take the game into extra-time and then Josh Douglas headed what proved to be the winner on 99 minutes.
This final had more twists and turns that a spiral staircase and at the end of a memorable day it was the Super Seagulls who wrote their names into the history books for ever more. An emotional Tramore AFC chairman John Power summed up what it meant to the club after the presentation to Tom Carney.
“This is another wonderful day for our club and our town. Gary, Brendan and Paul set out to win this cup and I suppose some people laughed at us and they said “the cheek of ye” but we have done it. The lads were totally focused on winning it and they set their stall out to do it from early on in the season and it probably cost us the Munster Youth Cup but it’s all been worthwhile. A lot of people were looking down on us today because we got the breaks but that’s football. I suppose we have to ask ourselves the question now “where do we go from here? It’s unbelievable”.