Blues Back on Song

Waterford maintain unbeaten League record at the RSC
Waterford FC extended their unbeaten home record on Friday night when they proved too powerful for Bray Wanderers during the second half.
Leading up to the game all of the talk was about the players who were missing due to suspensions and injury, but when the referee blew the fulltime whistle another name was on everyone lips.
Faysel Kasmi, the diminutive midfielder who was born in Belgium, was the player everyone was raving about because he produced a master-class and also scored two wonderful goals on what was a glorious April evening.
This latest victory at the RSC has moved the Blues back into third position on the league table, just four points behind the joint leaders Dundalk and Cork City. In fairness to the visitors they had chances during the opening half but they had to play second fiddle after the change of ends.
Blues manager Alan Reynolds was back in the dugout after serving his one match suspension the previous Monday in Richmond Park and he was a happy man when he spoke after the game. 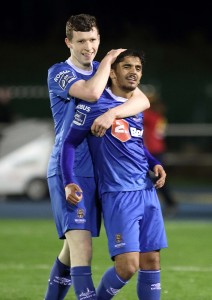 “I thought we did well in the opening 20 minutes but I changed things around for the second half and I looked at Kenny Browne playing out there tonight with broken ribs and I think back to hurlers like Ken McGrath, and just like Ken, Kenny Browne is a warrior. He was determined to play tonight and put his body on the line. He is a local lad and he wants to do well for the club. He hasn’t even trained this week but look at what he did tonight.”
Reynolds added: “Izzy Akinade did well tonight also. I was delighted to hear the crowd getting behind him. He is only 23 years old and he needs encouragement because he gets stick from certain supporters around the country. I was delighted for ‘Kassie’ tonight. He’s a great character in the dressing room and he is the life and soul of the place. He took a while to get match fit and people were waiting to see what he was capable of and I believe he will prove to be a major signing for us.”
Also saluting the “immense” John Kavanagh, Alan Reynolds stated: “Unfortunately he picked up an injury tonight and we will have get a scan done on it. He is our silent assassin because he could cut you in half with some of his tackles. I just want everyone to get behind the club from here on in. We have had our blip and we have come through it. We didn’t play well in our two previous game I know that but we want everyone to stick with us from here on in.”