Red Star 3
Portlaw United 2
Red Star won the first domestic cup final of the season in Ozier Park on Friday night when they defeated Portlaw United with a goal scored one minute into stoppage time.
Conor McDonald gave Red Star the lead after just nine minutes.
Red Star doubled their advantage on 13 minutes when Conor McDonald scored again, this time from the penalty spot after Anthony Burke was taken down by Logan O’Sullivan. 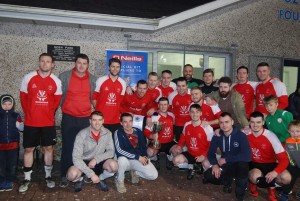 The entire course of the game changed on 59 minutes. Sean McLaughlin, a substitute who was only on the field for 15 seconds, was sent off and that gave Portlaw an opportunity to get back into the game. They pulled a goal back through Paul Diffily who headed home a free kick taken by Logan O’Sullivan.
The ‘Paddock Men’ equalised on 85 minutes from the penalty spot. Red Star goalkeeper John Tocknell was adjudged to have fouled Robert Allen and Dermot O’Sullivan dispatched the spot kick.
It looked at that stage that the final would go to extra-time but one minute into added time Paul Diffily and Conor Purcell combined to get the ball to Anthony Burke who chipped the ball over the head of Nicky Kiely from 22 yards.
Eric O’Mahony, the Portlaw United defender was named ‘Man of the Match’ by the O’Keeffe family. This was a rip-roaring cup final and it augers well for all of the remaining games to be played in Ozier Park during the coming months.