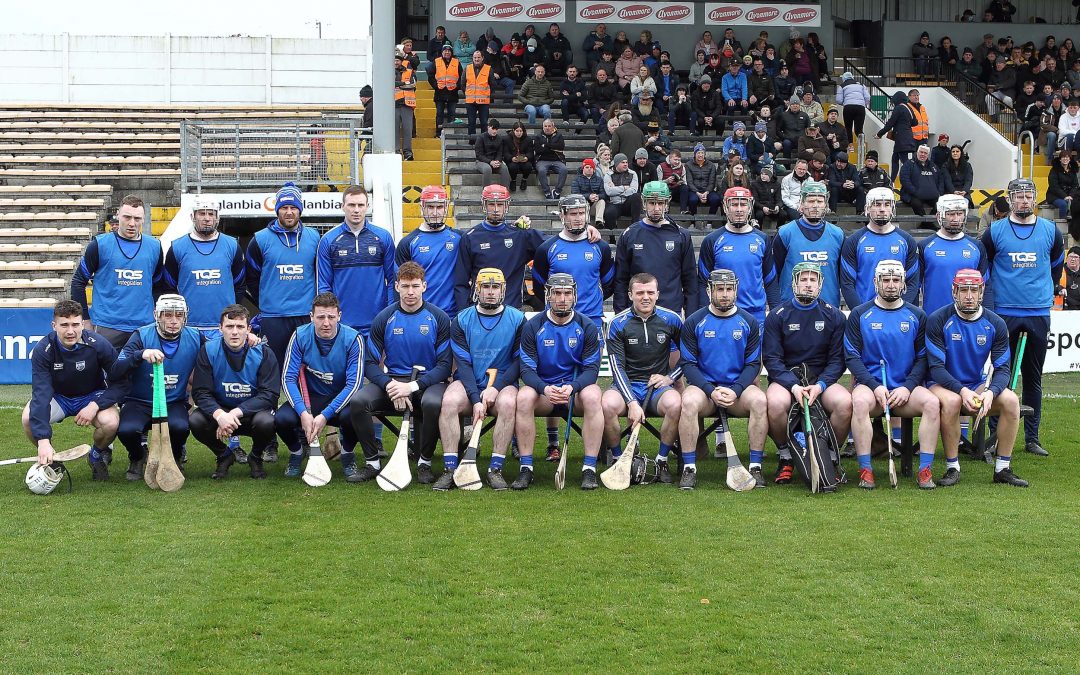 Kilkenny finished top of Division 1B of the Allianz National Hurling League after this determined and well merited six-point victory to claim the bragging rights over neighbours Waterford. 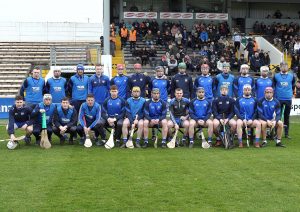 A goal in either half from Cillian Buckley and Billy Ryan ultimately proved the difference with both sides qualifying for next weekend’s semi-finals.

Waterford will now face Wexford back in Nowlan Park while Kilkenny must travel to Pairc Uí Chaoimh for their last four contest.

Brian Cody too had Ballyhale Shamrock’s Richie Reid and Adrien Mullen back in his starting 15 with Eoin Cody among the substitutes as their talisman TJ Reid is currently unavailable due to injury.

Alan Murphy opened the scoring for the home side after just 45 seconds but it was Waterford who were much the better side in the opening quarter. 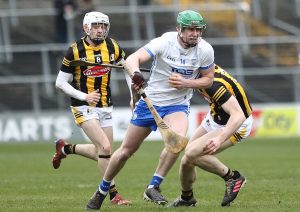 Waterford’s Michael Kiely breaks through the Kilkenny defence early on in the game.

Waterford looked far more comfortable in possession early on with Iarlaith Daly and Jack Fagan dominant in defence during the early exchanges while the industry of Darragh Lyons, Neil Montgomery and Austin Gleeson also obvious.

By contrast Brian Coady’s men looked cumbersome on the ball and struggled when attempting to play the ball through the lines and attempting to clear from defence. Abbeyside’s Neil Montgomery twice intercepted would-be clearances to point from play with Michael Kiely, Austin Gleeson, Jack Fagan and Dessie Hutchinson all on the scoresheet early as Waterford led by double scores, 0-8- to 0-4 after 17 minutes.

The visitors arguably could have been even further ahead as Austin Gleeson had flashed a goal effort across the face of the Kilkenny goal on 14 minutes.

Gleeson had found himself unmarked and alone in front of goal with brilliant vision from Pauric Mahony orchestrating the goal chance for the Mount Sion man.

Gleeson appeared almost surprised that Mahony had managed to thread a needle with the pin-point pass with Austin perhaps rushing the shot off his left-hand side.

Kilkenny, who required the win to progress, steadied and worked their way back into the contest.

The ‘Cats’ took over the remainder of the first-half and outscored Waterford 1-6 to 0-3 to go from four points down to two ahead by the half-time whistle with a towering performance from full-back Huw Lawlor with man-of-the-match Padraig Walsh alongside fellow half-forward Walter Walsh helping to turn the tide.

The Walsh pair in black and amber hit five points from play between them in the opening period but it was the goal from Cillian Buckley after 25 minutes that got Kilkenny level, 1-7 to 0-10.

Unsurprisingly it was a cross-field ball from the influential Padraig Walsh that found his half-back David Blanchfield unmarked.

When the Bennettsbridge youngster hand-passed to Cillian Buckley off his shoulder it appeared a routine point was on offer but Buckley carried the ball further at the Waterford goal before crashing and angled shot from 14 yards to the top right hand corner of Billy Nolan’s net. 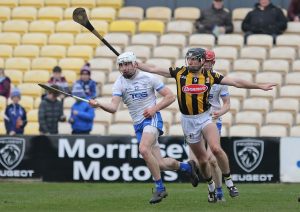 Goalkeeper Eoin Murphy landed a free from his own 45m line to leave Kilkenny leading 1-10 to 0-11 at the interval.

Pauric Mahony made way for DJ Foran at the half-time break but it was Kilkenny who resumed where they had left off in the opening half with three points on the bounce from Billy Ryan, Walter Walsh and Padraig Walsh to stretch the home advantage to 1-13 to 0-11.

However Kilkenny’s goal number two arrived in the 47th minute from Billy Ryan and made it a now difficult task for the Déise.

A deflected shot from Padraig Walsh fell perfectly for Billy Ryan who turned his marker inside out before hitting the net unopposed, 2-14 to 0-13. 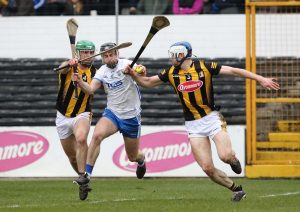 Waterford’s Colin Dunford tries to force his way through both Huw Lawlor and Tommy Walsh of Kilkenny.

Substitute Eoin Cody also hit two superb points on introduction for Kilkenny as for once the Waterford substitutes failed to make the required impact.

Portlaw’s DJ Foran’s miserable afternoon was capped off with a straight red card for a high challenge on 61 minutes reducing Waterford to fourteen players. 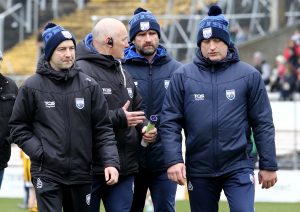 Waterford did reduce the margin to just three points with five minutes remaining thanks to points from Austin Gleeson (2) and Dessie Hutchinson but Kilkenny finished with a flourish hitting four of the last five points. Fittingly it was the outstanding player on view, Padraig Walsh who shot the closing point to send Kilkenny top with both teams now qualifying for the league semi-finals.

Waterford will play Wexford this Sunday in their semi-final with a number of players like the rested Stephen Bennett and Patrick Curran set to return. It remains to be seen if any of the walking wounded; Calum Lyons, Jamie Barron, Conor Prunty or Ian Kenny will be declared fit for selection next weekend.

Kilkenny will also hope to have TJ Reid available again to boost their chances of another final appearance.