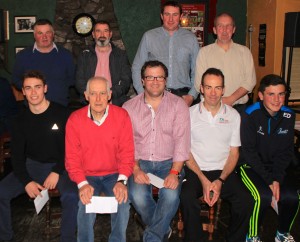 As promised in our last putting of pen to paper, we give an update of activities in our junior section this week.The juniors were back big time early in September, and junior coaching is flat out each Saturday, with Jack, our senior coach, and all other coaches and organisers.
Blitz
In October we hosted a mini blitz for juniors. Thirty eight matches were played. In addition to our own throng of juniors we had visitors from Celtic and Barntown in Wexford. All had a great day, and a big thank you must go to Jack Laffan, his band of supporting coaches, helpers and parents.The good news is that there is another blitz planned for Saturday 3rd December.
Competitions:
Belfast
The Ulster Junior Open was held in Belfast on 22nd of October. Well done to Eoghan Dunphy who came third in the boy’s U13 section and Jordan Scholtz, who was fifth in the girl’s U17 competition. Competition was very stiff, but our representatives certainly did themselves and the club proud.
Cork
A large contingent of almost 20 travelled to Cork for the Munster Junior Opens on the weekend of 12th/13th October. It must be said that they looked very well in their club colours.
Eoghan Dunphy and James Gaffney finished fifth in the boy’s under 13s and under 17s respectively. Niamh Kirwan was third in the girls under 13s while Alanna Murphy was fifth in the same competition.
A special mention must go to Katie Dunphy, who, at the tender age of eight was the youngest competitor in the competition.
Thurles
The Munster Invitation for juniors will be held in Thurles on 10th/11th of December. We expect to have the usual exodus of young members to the Tipperary venue that weekend.
Ireland training call-up
Congratulations to Alanna Murphy and Niamh Kirwan, who have been called up for Irish coaching in December. Just another testament to the dedication of both coaches and juniors at Dunhill Squash Club.
We’ll be back next month with more news of our juniors and how our Jack Molloy Catering sponsored Christmas League pans out and also how our now up and running Box Leagues are going.