Home » Sports » GAA Hurling » Fanning's Men Off to a Flyer

Fanning's Men Off to a Flyer

Brian Flannery Reports
PARAIC Fanning’s Waterford managerial reign got off to a winning start with a six point win over Cork in the opening round of the Munster senior hurling league.Played at Mallow on Wednesday night last in front of an attendance of 2,022 this was the perfect beginning to a new era for the Déise hurlers.Waterford had a far more experienced side on show than a Cork teamwith Christopher Joyce as their sole championship starter from 2018. 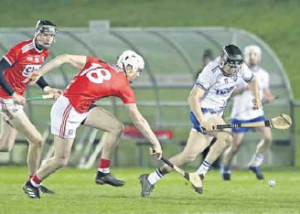 The home side lead 0-4 to 0-3 after nine minutes but Waterford hit seven of the next eight points to deservedly lead by double scores 0-10 to0-5 with 20 minutes elapsed. Kevin Moran, Jamie Barron and Mikey
Kearney were all on the score sheet with Stephen Bennett leading the line in the number 14 shirt, landing scoresfrom play and frees.In the 22nd minute a line-ball from Declan Dalton broke kindly for Aidan Walsh in front of goal with the former football All-Star reacting quickest to whip the loose ball past debutant Billy Nolan for the game’s opening goal.Cork rallied from there to the break and took a 1-11 to 0-12 lead to the dressing rooms.
The second half began with Kevin Moran now at centre-back with Michael Walsh in his 17th season switched to the number 11 position.Michael O’Halloran had an early Cork point. However a youthful Cork
defence made a hash of a short puckout with the vigilant veteran Michael Walsh pouncing to shoot high to the
net following the turn-over on possession,1-12 apiece.Waterford’s hurling was just a tad more accurate and precise while Cork frequently needed multiple short passes to go nowhere in particular.Stephen Bennett continued to land scores from all angles with Tommy Ryan and Mikey Kearney both also landing a pair of white flaggers over the second period as Waterford had pushed the lead back out to 6 points,1-21 to 1-15 with just 6 minutes to play. Cork’s most impressive performer Tim O’Mahony, DeclanDalton and Christopher Joyce all landed points in succession to reducethe margin to a goal approaching fulltime. Roanmore’s Billy Nolan did well to deny substitute Cormac Beausang a goal while Stephen Bennett(2f) and Jack Prendergast closed outthe scoring with injury time points to better reflect the visitor’s superiority on the scoreboard.
New Captain Noel Connors was sureness personified with Jordan Henley, Kevin Moran, Mikey Kearney, Thomas Ryan and Stephen Bennett all showing good early season form.Tim O’Mahony, Christopher Joyce,Cormac Murphy and Declan Dalton were best for John Meylers side