Tony Ryan Reports
THE difference in standard between teams in Division 2 and Division 4 of the National Football Leagues was clear to see at the Gold Coast Sports venue in Ballinacourty last Sunday afternoon in the semi-final of the Munster McGrath Cup competition.Clare eased their way into this weekend’s decider, against an equally impressive Cork against Limerick in Rathkeale, with a pillar to post win over the home side Waterford, who though outclassed, battled on in the ideal weather conditions to the final whistle. 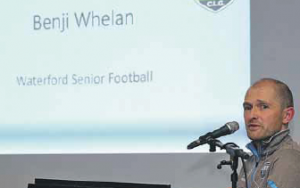 Waterford manager Benji Whelan gave competitive debuts to Aaron Beresford and Sean Whelan Barrett of Ballinacourty, Brian Lynch (Clashmore/Kinsalebeg) and Stephen Curry of Rathgormack.
Further to this quartet, Sean O’ Donovan(Modeligo), Jay Hurton(Kilmacthomas) and Donie Fitzgerald
(Kilrossanty) were introduced during the game to a team with a distinct experimental look about it.
It was also good to see Stradbally’s Shane Aherne and An Rinn’s Ray O’Ceallaigh back in the county coloursthree weeks ahead of our first NFL outing at home to Wicklow. With Clare’s first league game at home to Donegal two divisions above us, it was no surprise that the Banner County were in a league of their ownhere and they led by 0-8 to 0-0 after 25 minutes via minor scores by DermotCoughlan(2), Gary Brennan(2f), Cian
O Dea, Gavin Cooney, Dale Masterson and Kieran Malone. The homeside had yet to score when Clare deal ta deadly blow with a 30th minute goal from their wing back Conal O hAinifein which prematurely ended this game as a contest.
The home side were chasing shadows as the winners spread the ball impressively around the field but right throughout,Waterford’s work rate was commendable and a more potent forward division would have put a better look on the scoreboard from our point of view. Dungarvan’s Michael Kiely picked up a serious injury in the first half to be replaced by Seanie O Donovan before Waterford managed two scores from play before the break via Conor Murrayand James McGrath, 1-8 to 0-2 at halftime and they came more to terms with the winners in the second moiety losing out by just 0-9 to 1-4.
Joe Allen came on at half time in midfield for Dylan Guiry. The two number13’s dominated the early second half
scoring with Brian Lynch on targetfor the Deise followed by a brace ofpoints by his Clare counterpart, Gavin
Cooney(1f), 1-10 to 0-3.The industrious Sean O’ Donovanbecame the fi rst Waterford player tobe sin binned for ten minutes under the new experimental rules but whilehis team were reduced in numbers,Clare managed just 0-4 via Gearoid OBrien,Cooney, David O Halloran andNiall Ellis with a single reply by ConorMurray, his second such score fromplay, 1-14 to 0-4.
The exchanges in general play wereeven enough but Clare made roomeasier to add to their tally with scoresbeing delivered by Gearoid Cahill,David O Halloran and their fi nal whitefl ag by midfi elder Daragh Bohannon.The home side’s corner forward,Brian Lynch, popped over two pointedfrees as Waterford battled to the endand when sub Donie Fitzgerald scoreda 67th minute goal at the end of a verygood combined move, it was what theteam’s eff orts throughout deserved. ThatClare didn’t score a second goal was nocoincidence as the Waterford defence,though under constant pressure, harriedand hassled their opponents throughoutbut it was up front that we lacked realscoring power.
In preparatory respects, this was aworthwhile outing before the Nationaleague and though the Wicklow gamewill be our fi rst outing, it will be a mostcrucial one, playing at home, and it willbe most important to get off to a positivebeginning.