ST Joseph’s kept their promotion hopes alive when they came out on top against Portlaw United at The Paddock on Saturday afternoon last.The defeat has put a huge dent in the title hopes of the home side but going on the overall 90 minutes, the final outcome was a fair one.The visitors almost took the lead after five minutes when Ryan Sinnott latched on to a pass from Martin O’Neill but his well struck shot was brilliantly saved by the home goalkeeper Mark Morahan. Colin O’Brien had the first chance for Portlaw when he took a neat ball from Luke Duggan but his effort was well held by Richard Roche.The entire course of the game was changed when St Joseph’s scored two goals within the space of three minutes and it was their right-winger Ryan Sinnott who netted both. 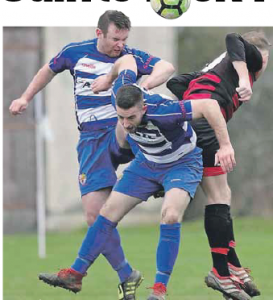 The opening goal arrived on 23 minutes. Geoff Tebay took off on a strong run down the right flank and crossed deep into the penalty area where Ryan Sinnott made no mistake with his right foot from 12 yards.Matters got even worse for the host three minutes later. Shane Wyse was allowed to much space and when he whipped the ball over to the back post Ryan Sinnott was well placed once again and this time he headed the ball past Mark Morahan.In fairness to Portlaw they battle back and Luke Duggan was just off target with a header on 31 minutesfollowing an excellent cross by Luke Woods.
The home side pulled a goal back in the 35th minute. Right-fullback Gary Morahan played a long ball downfield to Luke Duggan who raced forward and drilled the ball past Richard Roche from deep inside the 18 yards box.It was a case of game on at this stage but Martin O’Neill then missed a glorious opportunity to regain St Joseph’s two goal advantage on 38 minutes.Neat build up play between Ian Galgey and Geoff Tebay resulted in the ball being played into the slipstream mercy he shot wide from an excellent position.
When the second half got underway Portlaw set up camp inside the visitors half of the pitch but try as they might they just could not breach a rock solid Saints defence led superbly by Patrickand James Kennedy.The points were wrapped up when substitute Jack Kiely netted the third Saints goal. Patrick Kennedy played a long ball downfield and Kiely,who was only on the pitch for three minutes, raced past Michael Donnelly and planted the ball past the helpless Mark Morahan