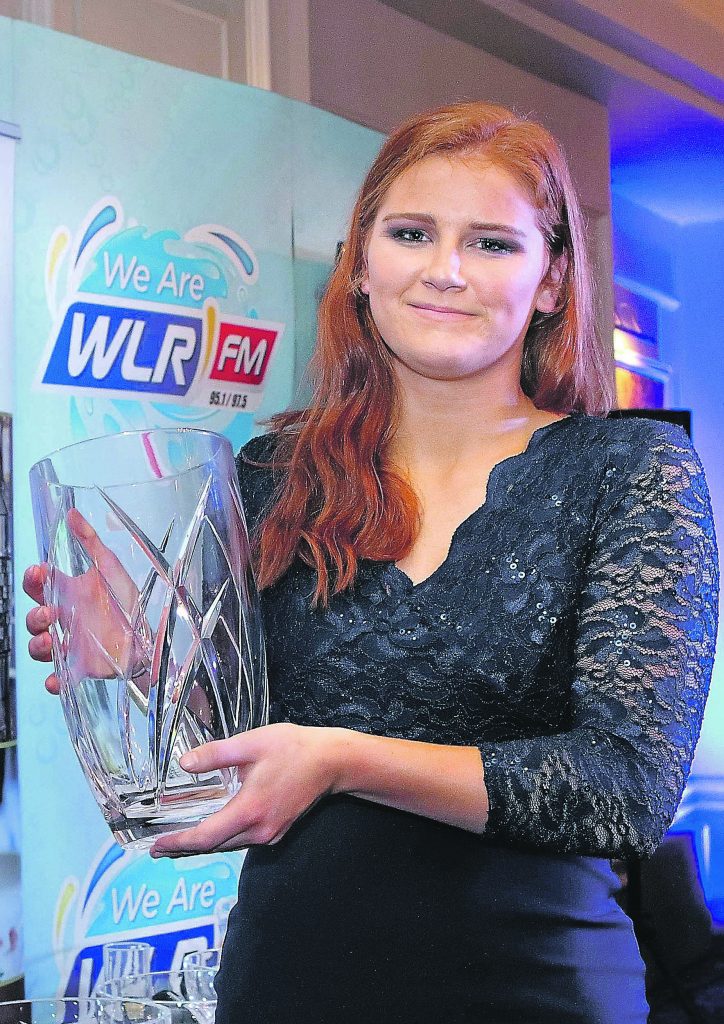 “It was definitely a good year for Waterford camogie, even here tonight you see what the Ursuline have done and the likes of Kate Lynch and Abby Flynn,” she said before a packed function room. “The thing now is to keep progressing; we did have a good year but we’re onto a new year now, 2019, and we hope it’ll be even better”
Henry Shefflin, who was special guest on Saturday evening last, said that Beth Carton made for a most deserving winner.
“As Beth said herself, there were serious contenders again this year, so I think anybody could have won the award, but I think given that she won Waterford’s first ever Camogie All Star, it’s nice to top that up and it’s just desserts for what Beth put into 2018.” Judges Liam Cusack, Stephen Frampton, Tomas McCarthy and Michael Drislane had the difficult task of deciding the overall winner with 25 per cent of the vote coming from WLR listeners.Abbey Flynn was presented with the Kevin Casey Emerging GAA Star Award, for which players aged between 14 and 18 are eligible.
Abby helped St. Angela’s (the Ursuline) to an All-Ireland camogie double. The Junior side defeated St Mary’s New Ross on a score line of 1-5 to 0-7 in their final replay at the WIT Arena.
Abby, who was captain and player-of-the-match, goal 10 minutes from time to hand her school a dramatic victory. She also netted a brace of goals as Waterford captured their maiden Munster Minor ‘A’ Camogie title when defeating Cork in Fermoy. Meanwhile, Donal O’Rourke’s Waterford Senior Camogie team begin their National League campaign on Sunday afternoon next away to Wexford at a venue to be confirmed as we went to press.
Last year was arguably the county’s greatest yet in camogie, narrowly missing out on a place in the League Semi-Finals on score difference before reaching the All-Ireland Quarter Finals, where they went out to a more experienced Tipperary side at Pairc Uí Chaoimh. The Deise will be without the services of Caithriona McGlone (who is due to give birth shortly) and she will be a big loss to the panel as you can always depend on her to pop up with a major score when one is needed. The management team must also do without Caithriona’s Lismore club mate Shauna Kiernan (last year’s captain) who has decided to travel this year. Meanwhile Kate McMahon will also be unavailable this year for personal reasons.
But the management team have brought in quality players, including Sarah Lacey and Keeley Corbett Barry, both of whom were part of the Munster Championship winning Minor panel. while Caoimhe McGrath and Shona Curran, two players with considerable big day experience, have also come on board.
As for Sunday’s game, it’s expected that the team will be without the Gailltir contingent (Ciara Jackman, Annie Fitzgerald, Kate Lynch, Hannah Flynn, Clodagh Carroll, Áine Lyng, Shauna Fitzgerald, and Emma Hannon) as they’re in action in the All-Ireland Intermediate Club Semi-Final against Offaly’s Saint Rynagh’s the following weekend.