Munster Senior Colleges ‘A’ Camogie Final
St Angela’s Ursuline 1-11
Scoil Na Tríonóide Naofa Doon 0-05
St Angela’s Ursuline added to last year’s All-Ireland success with a comprehensive win over Scoil Na Tríonóide Naofa, Doon in the Munster Senior Colleges ‘A’ Camogie Final in Cappamore, Limerick on Saturday.
Ursuline lined up for the start of the game with two changes from the team listed with Alisha Flynn coming in at full forward in place of Aoife Fitzgerald and Laoise McLoughlin making way for Jodie Touhy to start at midfield with Kate Lynch partnering her in the engine room. 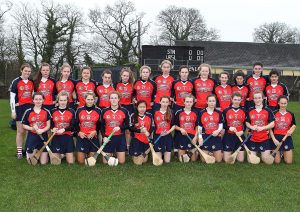 From the throw in the Ursuline showed their dominance over a physically strong Doon outfit with Jodie Touhy driving at the heart of the Limerick side’s defence working the ball to Abby Flynn for the opening point of the game after just under a minute on the clock.Within the first six minutes the Waterford city based school had raced into a four point lead with the next three points coming from the hurl of captain Annie Fitzgerald, two coming from play and one from a placed ball.
The attacking threat of St. Angela’s continued to cause the Doon defence issues early on, however the under par finishing allowed the Limerick side a reprieve. After ten minutes Doon had their first attack with Ann Hayes dropping a shot wide, and soon after at the other end Annie Fitzgerald had a shot at goal saved by Gemma Fox in the Doon goal, the ball breaking to Abby Flynn who took the point with aplomb. The next eight minutes saw some frantic scenes with Doon registering their first score of the game through a place ball from the stick of Leah Heffernan and soon after the Ursuline attacked once more with Annie Fitz being pulled down to receive a penalty and the wing back receiving a yellow card. Up stepped De La Salle’s Abby Flynn but the balled went the wrong side of the post. 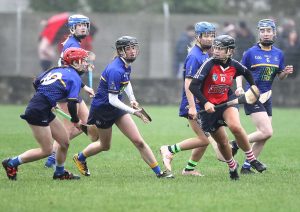 The game continued at a fast pace with the hard working duo of Clodagh Carroll and Kate Lynch continuing to link the defence and attack with great skill and composure as the half wore on.After 20 minutes St Angela’s led 0-05 to 0-01. In another two minute spell, Ursuline laid siege to the Doon goal but could not raise a green flag leaving with only a white flag to show from their efforts through Abby Flynn. Doon however finished the stronger towards half time with Eva O Dwyer producing a shot on goal that Leah O Donoghue got a hurl to.
Shortly after that Karen Cunningham got Doon’s second point of the game, once again from a placed ball to leave the score 0-06 to 0-02 in favour of the Waterford outfit at half time.
The second half saw an early free converted by Gailltír’s Annie Fitzgerald but Doon soon kicked into life with the Limerick side dominating the next ten minutes coming away with two points inside this period and a goal chance of their own from Lisa Meehan. Leah O’ Donoghue once more got a hurl to it but it bounced up and hit the crossbar falling away from the goal much to the relief of the large Ursuline following.
The next 5 minutes saw both team’s trade points with Annie and Abby both raising white flags while Doon’s Leah Heffernan raising the white flag again through placed a placed ball. This proved to be Doon’s final score of the game with the Ursuline defence marshalled by Lucy Hogan at full back and Leah Sheridan centre back controlling matters.
The Ursuline tagged on two more points from Abby Flynn and the decisive goal came through a great ball from Ciara O Sullivan to the unmarked Annie Fitzgerald who finished to the net expertly leaving the score line at 1-11 to 0-05 with eight minutes remaining. Doon’s never say die attitude showed and they threw everything at the Ursuline defence with them too be awarded a penalty of their own. Full forward Eva O’ Dwyer took it but again Leah O’ Donoghue was equal to the shot. On the follow up Doon full back put in a high challenge on Lucy Hogan receiving a red card to compound the heartache for the Limerick side.
Doon failing to score in the last fifteen minutes, and failing to score from play from start to finish showed the resolve of this Ursuline team. The full time score reading 1-11 to 0-05. The Ursuline machine rolls on after being crowned Munster Senior ‘A’ Champions with captain Annie Fitzgerald accepting the trophy on behalf of her teammates for the first time in their schools history. Up next for the prolific school is an All-Ireland Semi Final with their opponents to be confirmed.