Franny Rockett, the Waterford first team coach admitted he was bitterly disappointed not only with the final score but also with the display of the team overall.“We’re very disappointed after that. The Munster derbies are the lifeblood for supporters here in Waterford and they come out for these games. The fans that don’t come to other games come to this one and we’re just disappointed after that.“I thought that the way we started the game was disappointing because you would like to think that we would be up for it. Even the normal 50-50 tackle we weren’t there and I thought that we were second to everything if I’m honest, which is a big disappointment.“I think that’s it’s a sickener that we were out of the game for so long that we were so slow. It was all so slow to realise that we needed to do better especially when we conceded the second half. That’s a real disappointment for me. 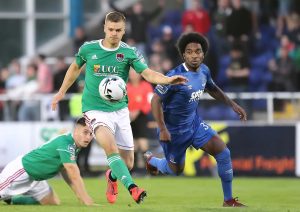 “It’s so frustrating to be honest because in the build-up to this game, we were hoping to build on things and we were very confident coming into the game, but we started off on the wrong foot. We were so slow, sluggish, lethargic or whatever you want to call it.“I thought that our decision making on the ball was poor and we didn’t create any chances. You must be clinical, and we aren’t. The couple of chances that we did create, we didn’t take. We conceded from a set piece again and that was down to us losing our markers. It was miscommunication in the box and we were punished for it.“We left one of their best threats in attack from set pieces free in the area and that was down to poor marking which we never recovered from. That’s what is going to happen when you do that. You are going to be punished and we were.

“Mark O’Sullivan is an absolute handful and if you give him a chance to turn and strike, he is going to hit the net like he did tonight. I thought that maybe we were starting to come back into the game slowly at that time, but obviously when they get the second goal, it’s an uphill task after that.“I don’t think that we can feel sorry for ourselves after losing tonight. We have lost quite a few games this season and we need to bounce back. We now need to regroup, stay together and be positive going forward. I thought that the emotion and intensity started to lift there in the last five minutes.“We got the goal, but we needed a decision to go our way from the officials. That didn’t materialise for us and to be honest with you, we left it too late. We hoping to start the game on the front foot, we didn’t, and I think that we left it go from there to be honest.“You are never going to be able to agree 100% with the officials and I know that from playing. You are never going to be able to get what you want, but you would be disappointed with quite a few of them decision tonight. We are big and bold enough to make your own luck, we didn’t get the luck. If we are trying to get referees to try win you games, you have another thing coming. We have to be clinical in our play and create our own luck.”