First Loss for the Blues

Waterford FC lost for the first time this season to Cork City on Friday night at the RSC. The Blues had recorded two victories over the Leesiders in the previous two meetings but on this occasion they turned in a sluggish display and they could have no complaints whatsoever about the outcome of this match. The home side were still in with a chance of getting something from the contest until a former Waterford player, Mark O’Sullivan scored a super goal for the visitors on 69 minutes. It proved to be a special day for “Marko” because a few hours before the match his wife gave birth to a baby daughter. When he left the pitch after 82 minutes he received a standing ovation from the Waterford fans and he admitted afterwards that he was thrilled to still be appreciated by the Blues supporters. He scored many vital goals as Waterford won the First Division League title in 2017. The result keeps Alan Reynolds men at the wrong end of the table and with games against Shamrock Rovers and Cork City once again on the horizon it is a worrying time for everyone involved with the club. 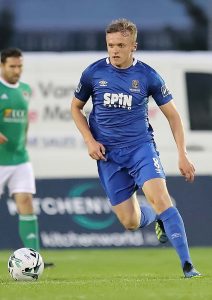 The Blues had a strong penalty appeal turned down by referee Ray Matthews when Michael O’Connor looked as if he was dragged back in the area by Cork defender Dan Casey, but the referee waved away the protests from the Waterford players.O’Connor forced the first save from either keeper on 23 minutes when he took a pass from Zack Elbouzedi on the right-side of the penalty area, but his low shot from 16 yards was straight down the throat of City keeper Mark McNulty.A good Waterford move down the right brought another save from McNulty two minutes later when Elbouzedi linked up with JJ Lunney and Tom Holland before receiving the ball back, but despite turning onto his left-foot, his shot was saved at the near post.

Walter Figueira carved out a real chance for himself on 34 minutes when he latched onto a Kevin Lynch ball down the left-side of the penalty area, but his goalbound left-footed shot from an acute angle was blocked on the line by Cork defender Dan Casey.Former Blues player Kevin O’Connor went close to breaking the deadlock for the visitors five minutes before the sound of the half time whistle when he cracked in a shot from the left-side of the area, but his dipping strike from 25 yards went over the bar.The second half was less than a minute old when the hosts had a good chance when Zack Elbouzedi put in a super cross from the right that was cleared to Michael O’Connor, but his volley was brilliantly blocked by Alan Bennett, who had replaced Dan Casey at the break.

Bennett caused a real problem in the Waterford penalty area minutes later when his goalbound effort was blocked out by Kenny Browne and from the resulting corner kick, Cork went in front on 48 minutes. Kevin O’Connor’s corner kick from the right that was met by Conor McCarthy, who powered a volley past a static Matt Connor from ten yards.Rob Slevin had a chance for the Blues on the hour mark when Tom Holland sent in a free kick from just inside the Cork City half after a foul on Figueira and under pressure from Alan Bennett, he shot straight into the hands of Mark McNulty.It was Mark O’Sullivan, who came back to haunt his former club as he doubled Cork’s lead on 69 minutes when Garry Buckley’s through ball wasn’t dealt with by Tom Holland that allowed the former show neat footwork to turn Rob Slevinbefore drilling a low right-footed strike to the left-hand corner past Connor from 16 yards.

Waterford FC manager Alan Reynolds emptied the bench soon afterwards as he brought on Cory Galvin, Sam Bone and Dean Walsh in the hope of maybe forcing some type of comeback, and they manage to pull a goal back on 88 minutes.Rory Feely was the man that picked up the ball down the right side of the penalty area before putting in a deep cross to the back post for JJ Lunney and his header beat Mark McNulty to give the Blues some hope of grabbing something out of the game. Feely almost grabbed an equaliser  in the last minute but his header went narrowly over the crossbar.