From 6am to 6pm in Portlaw on Saturday last, the friends of Kenny Reade hurled (many simply attempted to hurl!) and cycled in their hundreds to support the Carrickbeg/Portlaw man, who has borne his ill health of recent years with incredible dignity. 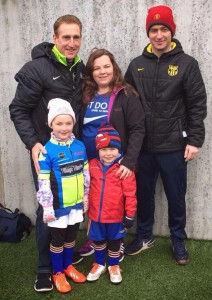 The Reade family (Kenny, Mandy and their children Senan and Ruby) pictured with Sean Kelly, at Portlaw GAA Club on Saturday last.

After 12 hours of good humour and great company, everyone present had a timely reminder of the power of community and the fantastic role that both the GAA and the booming interest in cycling can play in bringing people together. The best of people.
And by the end of the day, the four-strong organising committee estimated that a tally approaching five figures had been raised in support of Kenny, a wonderful testament to the affection that he and his family are held in across Portlaw, Carrick and further afield.
“There’s few occasions in someone’s life that leaves you speechless, blown away and just humbled by peoples’ efforts and goodwill, but happened in Portlaw on Saturday was just indescribable,” said Kenny.
“From all the lads who togged out to hurl and spin from 6am to 6pm in what were testing weather conditions, all I say is top class and if I didn’t get to thank ye all personally I’d like to thank you all now…it’s something that will stay with me forever. I’m still shaking from it all. To John Mullane, thank you; to Martin Gordon, a man I haven’t seen since the days in Tybroughney playing soccer with Carrick for bringing Liam MacCarthy over for visit, it was fantastic for all the kids to see the holy grail and lift it.
“And finally to ‘The ‎King’, Sean Kelly, who stayed around for hours, posing for photos and talking to so many people, enjoying the craic either in the alley or at the spinning – thanks so much – we don’t realise how fortunate we are to have a sporting god on our doorstep.” 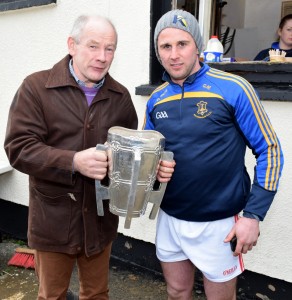 Kenny’s wife Mandy echoed those sentiments. “It was a day that we will never forget, we cant thank people enough for their kindness…we were truly blown away.”
She added: “Myself and Kenny are well used to battling storms so Saturday’s stormy weather wasn’t going to get the better of us either and it was so encouraging to see it never fazed any of the great people that came out to support us.
“Dawn to Dusk may sound like a lot of hours but each and every one of them was filled with so much fun, laughter, tears and treasured memories which continued late into the night. Thank you everyone!” 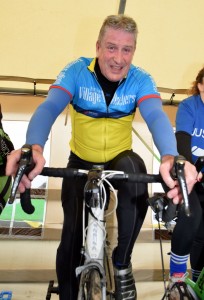 Portlaw GAA's Dick O'Shea, in full flow during the Spinathon on Saturday last.

The ‘Golden Oldies’ hurling match, which featured John Mullane, club legend John Galvin, chairman Paudie Coffey and a host of other players, some of whom hadn’t raised an ash plant in anger for over 20 years (!), proved an absolute hoot. There’s even talk of making it an annual event, which sounds like a great idea as far as anyone who played on Saturday will testify to.
It’s never a burden to lend a hand to those who deserve it. Kenny and his family firmly fall into such a bracket, and all those who supported Saturday’s Hurlathon/Spinathon will extend every good wish to him in the challenges that lie ahead. And what fun we all had last Saturday!

The 'away' Portlaw line-up, prior to a few groin/hamstring strains!