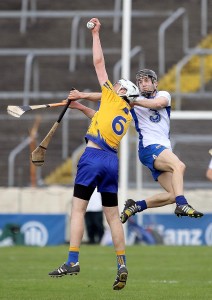 Waterford and Clare produced a classic League Final replay at Semple Stadium. More of the same on Sunday next would set the Hurling Championship alight.

This is it. This is what months of sweat-extricating toil amounts to and counts for. This is when, for all the respect we’ll always hold in our hearts for the National League, wearing the county jersey matters most.
Waterford facing Clare in the Munster Hurling Championship semi-final in the sport’s most treasured southern cathedral. “A semi-final that I reckon is going to feel like a Munster Final,” according to Deise boss Derek McGrath.
It’s what makes eating ham sandwiches in Thurles while sat on the lip of your open car boot a quasi-religious ritual. If this doesn’t get the blood pumping, the vital signs might need re-checking. Andy Williams was wrong: this is the most wonderful time of the year.
Expectation is rife in those counties harbouring genuine and realistic ambitions of firstly challenging Kilkenny’s near monopolitstic grip on the MacCarthy Cup and, secondly, wresting it from the Cats’ claws. Because make no mistake, they remain the team to beat.
Two of the pretenders to their crown, both of whom saw off Kilkenny en route to the drama they served up in two NHL Finals, Waterford and Clare, do battle again this Sunday.
After a first round of chess, their second round contest provided glorious pugilism, with both teams landing mighty blows before an injury time sucker punch which secured a first League crown in 37 years for Davy Fitzgerald’s men. No two in a row for our boys. The cruel beauty of sport, laid bare on the sacred sod of Semple.
So here we are, gearing up for round three between two teams laden with top class stickmen whom, I feel, would grace any era of the game. And who knows, this may not be the last time they draw ash upon each other this year – oh that the Championship should prove so kind to us.
For Waterford, Sunday isn’t about revenge for the League Final. “It’s Championship, a completely separate entity to the League,” said Derek McGrath who, at the time of writing, goes into this week with a fully fit panel to choose from.
“We’ve not even mentioned that word…but we wouldn’t be huge on using that as something to get the lads ready for this match, I have to say.”
With Paraic Mahony’s fitness developing, Maurice Shanahan moving more freely now than he has for several weeks, and the prospect of Stephen Bennett making the bench, the stars, literally, may be aligning for Waterford.
“I wouldn’t say that it was us at our best against Clare the last day, but we were close to it,” said McGrath, speaking to this newspaper on Sunday evening.
“The challenge now is to be better again because we’ll have to be way better than we were the last day to be competitive as we were and to try and get over the line. But I feel it’ll take on a life of its own next Sunday, that’s the feeling I have now, a week out from the game…
“I think we’re going to see full bloodedness, something we didn’t see in Thurles last week and I think we’re going to see both teams laying everything on the line…we’re trying to build to explode, to turn any nervous energy into excitement and freedom we have, to successfully tap into the adrenaline within the group – that’s the challenge for management ahead of match like next Sunday’s. There’s an edge to this match, and I’ve a feeling it’s going to be a good one.” Let’s hope for a Deise victory, and another berth in the Munster Final. But let’s win first and dream later. Port Láirge abú.