WAR OF ATTRITION ENDS IN DEADLOCK

The game was marked by some tempestuous first half exchanges, which resulted in each team being reduced to 14 men after 26 minutes.

Dermot Keyes
In about the worst conditions one could envisage playing a hurling match in, Portlaw and Tramore couldn’t be separated after 80 energy-sapping minutes in last Sunday’s Under-21 ‘B’ Final, staged in Kill.
Both sides, wearing predominantly blue jerseys, hopefully an anomaly that be rectified for next Sunday’s replay scheduled for Carriganore, enjoyed their respective purple patches, but in those phases, neither did enough to strike decisively for home.
And given that 13 of the game’s 24 scores came from placed balls, it’s no surprise that there was some enthusiastic sideline querying of several decisions adjudicated upon by referee Dessie O’Leary.
But the Erin’s Own official had an unenviable task to keep track of the action in such appalling conditions, with one of several scuffles leading to first half red cards for Tramore’s Jason Wilmott and Portlaw’s Craig Fraher respectively.
Portlaw went ahead thanks a DJ Foran free after only 12 seconds, and they doubled their lead in the fifth minute through the impressive Trevor Kiely, who latched onto Michael Walsh’s loose clearance.
Two minutes later, Tramore’s towering full-forward Brian Murray was adjudged to have been fouled inside the penalty area, leading to outstretched arms from Dessie O’Leary.
Murray picked himself up, but his shot was well saved by Portlaw goalkeeper Luke Power, who sprung smartly to his right to divert the goal attempt away to safety.
But Murray put that wrong to right come the 10th minute, with his thundering ground stroke giving Luke Power no chance between the sticks after Liam Goodwin’s shot had been blocked by a wall of Portlaw limbs.
Craig Coad found his range for Portlaw within two minutes of this final’s sole green flagger before Craig Fraher tagged on a fine score come the 14th minute. Four minutes later, Brian Murray converted the first of seven frees for Tramore, with Portlaw’s Jamie Murphy next to score in the 19th minute via a 65.
In driving rain, exacerbated by a punishing crosswind, DJ Foran and Brian Murphy exchanged frees in the 20th and 21st minutes. The second of two first half scuffles broke out in the 26th minute, with the red cards issued to Messrs Fraher and Wilmott largely restoring order for the remainder of this calorie-devouring endurance test. At the break, Portlaw led by the minimum, 0-6 to 1-2, having carried the greater threat from open play. 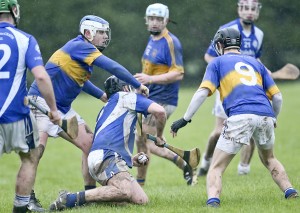 Nowhere to go: a grounded Philip Griffin of Tramore finds himself surrounded by Portlaw jerseys during last Sunday’s Eastern Under-21 ‘B’ Final in Kill. | Photos: Sean Byrne 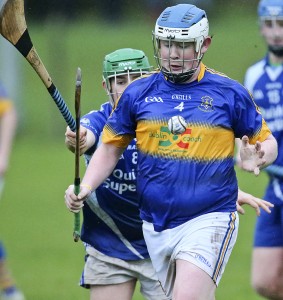 With the rain easing upon the resumption of play, seven minutes elapsed before Trevor Kiely landed a fine shot between Adam Murphy-Farrell’s uprights, with DJ Foran, doubled marked for much of the afternoon, adding a free 90 seconds later. And when Trevor Kiely struck his third point from play, Portlaw were four points clear and were good value for it. But they would not add to their tally until injury-time, with Tramore seizing the initiative in the interim.
Brian Murray found his range with another 40th minute free, by which time Tramore had scored only once from play, while the outstanding Matthew Thompson found his range with a free of his own three minutes later.
With Portlaw guilty of conceding too many frees, several of which were hotly contested both on the pitch and the sideline, Tramore hauled themselves back into contention, and two more frees by Murray in the 49th and 55th minutes restored parity. With barely a minute left in regulation time, Tramore substitute Sam Lenihan spun away from any would be blockers to strike a fine point and sent the seasiders ahead.
But just when one thought Tramore had done enough, DJ Foran, flanking off no less than three chasing backs, struck a terrific 40-metre point to send the match into extra-time, another 20 minutes, I suspect, no-one in Kill wanted.
With both teams now restored to the full compliment, the standard of hurling was all one could expect on an incredibly heavy and churned surface. Sam Lenihan opened the scoring inside the opening minute, with Jake Scanlon hauling the sides level by the fifth minute.
In an additional minute played at the end of the first period, Brian Murray landed another free to leave Tramore a point clear ahead of. At Dessie O’Leary’s behest, there was an immediate turnaround as the action resumed with great immediacy, leaving little time for either jaded side to draw breath.
Jamie Murphy’s 65 restored parity three minutes into the second period before yet another Murray free edged Tramore ahead with only three minutes of the 80 remaining.
Whatever Brian Murray could do for Tramore, Jamie Murphy replicated for Portlaw, and he showed fantastic nerve in the closing minute of the match to ensure another day out for both sides.
Hopefully, next weekend will permit a better quality of contest on a better surface because neither got an opportunity to show what they were truly capable of last Sunday. Indeed, there was something quite heroic about the manner in which both sides warmed to this contest given the appalling conditions.
Portlaw: Luke Power; Erin Furlong, Brian Coffey, Niall Phelan; Luke Woods, Jack Walsh, Jamie Murphy; Shane Power, Jake Scanlon; Trevor Kiely, Craig Coad, Derek Phelan; David Baker, DJ Foran, Craig Fraher.
Scorers: DJ Foran (0-4; 0-3f), Trevor Kiely (0-3), Jamie Murphy (0-3; 0-2 65, 0-1f), Jake Scanlon, Craig Fraher and Craig Coad (0-1 each).
* Nathan O’Connor came on in extra time when Portlaw were restored to 15 players.
Tramore: Adam Murphy-Farrell; Jason Wilmott, Philip Griffin, Ronan Walsh; Michael Walsh, Barry Whelan, Jack O’Byrne; Liam Goodwin, Conor Lynch; James Walsh, Craig Burke; Matthew Thompson, Brian Murray, Conor Cowman.
Scorers: Brian Murray (1-7; 0-7f), Sam Lenihan (0-2) and Matthew Thompson (0-1f).
Substitute: Sam Lenihan for Conor Cowman (46 mins).
* Joshua Malone came on in extra time when Tramore were restored to 15 players.
Referee: Dessie O’Leary. 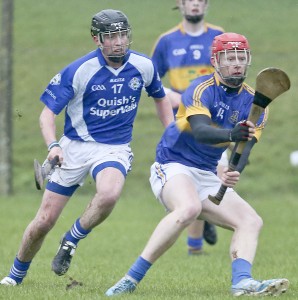 DJ Foran, who was double marked for much of Sunday’s Final, steers away from Tramore’s Matthew Thompson. 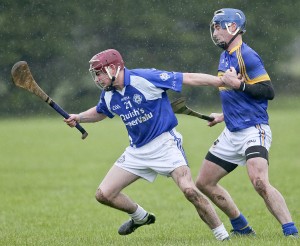 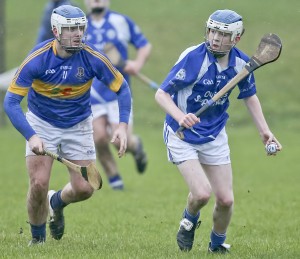 Tramore’s Jack O’Byrne about to clear, with Portlaw’s Jake Scanlon in pursuit.