Glee for the Barony as the title goes East 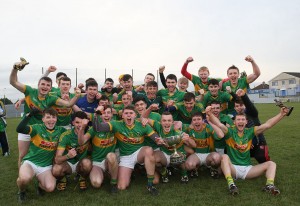 Under-21 ‘A’ Football Final Replay
Gaultier 0-13 – The Nire 2-05
The young men of Gaultier boosted their club’s morale and the fortunes of East Waterford football in securing the County Under-21 ‘A’ title in Sunday’s replay at a sparsely attended Walsh Park.
The superb double act provided by man of the match Caomhán Maguire and the athletic Billy O’Keeffe, coupled with the steadying influence of Sean White, who struck three second half frees, ensured a notable success for the Barony. 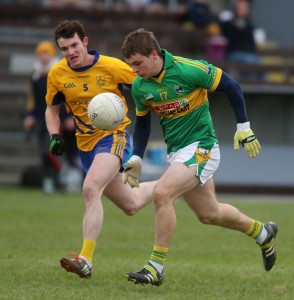 A race for possession between Gaultier's Sean Hogan and The Nire's Liam Cooney.

And let’s hope, in a year when Saint Saviour’s lost their senior status, that this win signals a barometer of improved fortunes for the big ball in the East come future Senior Championship campaigns.
From the off, Gaultier set the pace on the heavily sanded Keane’s Road paddock, opening the scoring through David Jones after fine build-up play by Dean Kearns and Chris Thomas. Three minutes later, the rangy Billy O’Keeffe doubled Gaultier’s advantage before Conor Gleeson opened The Nire’s account in the 11th minute.
Five minutes later, Gleeson inexplicably kicked a free wide from directly in front of the posts on a day when both sides were guilty of some elementary errors during an hour full of honest endeavour.
O’Keeffe and Donal Power, the latter operating as a sweeper cum playmaker, were edging the centrefield battle with Ciaran Looney and Dermot Ryan, and a powerful display from Caomhán Maguire ultimately tipped the tussle in Gaultier’s favour. 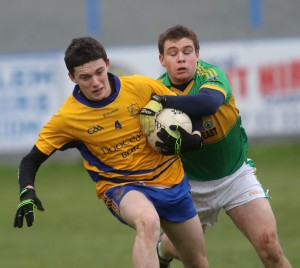 Gaultier came within a post’s width of a 20th minute goal through Craig Brown, whose initial shot had been well-smothered by Nire netminder Shane Mullen, and there was no doubting whose star was in the ascendant by then.
Sean Kelly landed Gaultier’s third point after 24 minutes before The Nire’s Tholem Guiry, similar to Jones’s opener, sent a shot intended for goal a few feet over the crossbar. Caomhán Maguire, deputising for Sean White on dead ball duties, found his range two minutes from the break to complete the first half scoring to leave the green and gold 0-4 to 0-2 ahead.
Three minutes after the restart, Waterford’s Underage Footballer of the Year Dylan Guiry blasted a magnificent shot into the top left hand corner of the net to send The Nire briefly ahead. But Gaultier retained their composure, with Billy O’Keeffe landing a superb point from just inside the 45-metre line. 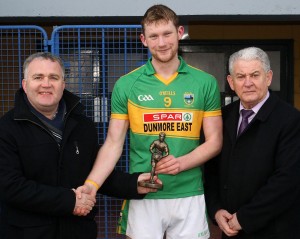 Caomhán Maguire struck impressively from distance in the 40th minute to restore The Barony’s lead, before Sean White, with his first touch upon introduction, impressively stroked a free-kick between the posts, and he added another pointed free on the three-quarter mark. Maguire capitalised on a poor Nire clearance in the 48th minute before White added his third free of the afternoon to send Gaultier 0-10 to 1-2 clear just moments later.
Gaultier, by then, were cantering, and that score rush was maintained when the superb O’Keeffe didn’t break his stride when landing a 20-metre point from the right flank, running onto David Jones’s incisive pass.
And on the green and gold rush went, as Caomhán Maguire brilliantly finished off a move instigated by impressive substitute David Dawson to send Gaultier 0-12 to 1-2 clear with nine minutes remaining.
Dylan Guiry bridged the 19-minute gap between Nire points to stem the Gaultier flow somewhat, with Gleeson adding a free barely a minute later. And when Dermot Ryan’s deflected shot looped beyond the reach of the already sprawled Patrick Lambe and into the net to, remarkably, leave just two points between the sides. 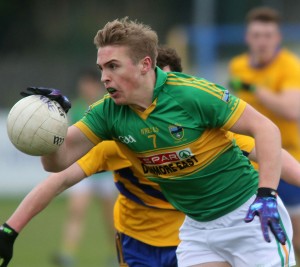 In the wake of the Junior and Intermediate Finals of recent Sundays, were we about to witness another smash and grab raid from a side that had been under the cosh for the vast majority of the game? But to give Gaultier their due, they were not about to be swayed from their triumphant course, as the brilliant Maguire send a howitzer of a point over the bar from plum on the 45.
There was still time for one more score, a pointed free by Conor Gleeson, whose talents were well smothered for a second successive weekend over the course of the hour.
Gaultier: Patrick Lambe; Darragh Lynch, Josh Cunningham, Stephen Lynch; Nick Byrne, Billy O’Keeffe, Sean Kelly; Dean Kearns, Caomhán Maguire; Gary Cullinane, Craig Brown, Donal Power; David Jones, Sean Hogan, Chris Thomas.
Substitutes: David Dawson for Dean Kearns (37 mins), Sean White for Chris Thomas (42) and Callum O’Neill for David Jones (60+).
Scorers: Caomhán Maguire (0-5; 0-1f), Billy White (0-3), Sean White (0-3f), Sean Kelly and David Jones (0-1 each).
The Nire: Shane Mullen; Jack Guiry, Jake Mulcahy, Tom Barron; Liam Cooney, Stephen Ryan, Ciaran Walsh; Ciaran Looney, Dermot Ryan; Glen Cullinane, Dylan Guiry, Shane O’Meara; Tommy Cooney, Conor Gleeson, Tholem Guiry.
Substitute: Anthony Gillman for Tholem Guiry (43 mins).
Scorers: Dylan Guiry (1-1), Conor Gleeson (0-3f), Dermot Ryan (1-0) and Tholem Guiry (0-1).
Referee: Pat Casey.