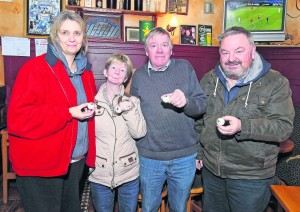 Pictured holding the winning ball at the recent Waterford Sports Lotto draw held in the Old Ground Bar were Fiona Murphy, Catherine Hannigan, Brendan Duignan and Eddie Dunphy. The winning numbers were 8, 16, 22 and 24 and there was no jackpot winner. Maurice Murray (Bolton FC) and Betty Hughes (Bolton FC) both matched three numbers and won €50 each. The final draw of 2016, which will be a Christmas party night for the SWaterford Sports Group, takes place at The Olde Ground on Tuesday, December 13th at 6pm. Photo: Noel Browne

St Joseph’s 2
Ballinroad 1
League leaders Ballinroad were red hot favourites to account for a St Joseph’s team who were bottom of the pile but after a tension filled 90 minutes in John Grant Park, St Joseph’s took all three points after a hard fought win.
They almost took the lead after 12 minutes when Billy Ryan slotted the ball through to Adam Deegan but he dragged his shot across the face of the goal from the right side of the 18 yards box.
Two minutes later David Looby was just off target for Ballinroad with a well taken free kick from 25 yards. Adam Deegan was in the thick of the action once again on 20 minutes.
Ben Arrigan slipped the ball through to him but with the goal at his mercy he shot straight at goalkeeper James Corcoran.
St Joseph’s went in front with the last move of the opening 45 minutes. Shane O’Brien sent over a dangerous cross from the right to Ben Arrigan who knocked the ball back to Cory Kavanagh and he was well placed to knock the ball past James Corcoran.
The visitors were out under pressure after the change of ends and Adam Deegan was denied a goal on 48 minutes when the Ballinroad defender Kevid Dee got in a brilliant tackle just as Deegan was about to pull the trigger from 10 yards.
Billy Ryan then let fly from 30 yards on 56 minutes and the Ballinraod goalkeeper James Corcoran could only parry the ball.
Following through Shane O’Brien latched on to the loose ball but his low drive from 12 yards was brilliantly saved by Corcoran.
The Ballinroad custodian was called back into action again on 72 minutes, this time getting down swiftly to save from Adam Deegan who had been sent clear by Corey Kavanagh.
The out-of-sorts league leaders fell two goals behind after 82 minutes when Ben Arrigan found the net from an impossible angle out on the left flank following excellent build up play by Billy Ryan and Cory Kavanagh.
The outfit from the west piled on the pressure for the last five minutes and Dylan Power produced an incredible save from Michael O’Neill on 85 minutes as he arched his back to tip over a header from O’Neill.
Michael Sweeney did stick the ball past Dylan Power on 88 minutes after a pass from David Looby but it was a case of too little too late for the crest fallen league leaders.
With fellow strugglers De La Salle defeating Portlaw, this victory could prove hugely important come the end of the campaign for the Saints.
ST JOSEPHS: Dylan Power, David Flynn (Daniel Coad `71) Robert McAra, Dylan Foley, Tony Winters, Corey Kavanagh, Ben Arrigan, Billy Ryan (Noel Flynn `86) Shane O’Brien, Adam Deegan, Emmet O’Toole (Shane Wyse `78)
BALLINROAD: James Corcoran, Peter Queally, Nicky Dee, Kevin Dee (Daniel McCarthy `82) Joe Allen, Sean Crotty, Ben Mulligan(James Oakely `71) David Looby, Michael Sweeney, Michael O’Neill, James Kennedy (Ronan Sheehan `71)
REFEREE: Jimmy McGrath.