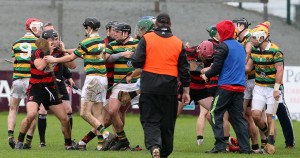 The 21st minute scuffle that led to red cards for both Philip Mahony and Dean Brosnan.