Fenor aim to extend their adventure 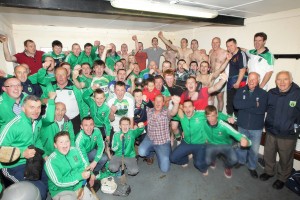 Might further celebrations beckon for the hurlers of Fenor?

Fenor will sample provincial club hurling for the first time as they represent Waterford in this years Munster Junior Club Championship at Walsh Park where they take on Clare side Ennistymon.
Fenor have not have played a competitive game since they beat Saint Mary’s at the same venue over a month ago, but no stone will be left unturned between then and now in preparation for this game.
The newly crowned champions will know that Waterford’s overall record in this competition is far from good but with both Ballysaggart and Modeligo winning it in over the past two years, they’ll be seeking to make it three on the trot for the Deise at this grade!
Fenor will also be aware that the Clare side did not win the County Championship in the Banner County, going out at the semi-final to Sixmilebridge by 1-13 to 1-10 score line.
They in turn lost out to Clonlara in the Championship decider, but with both of these sides ineligible to partake in the Munster Junior Club Championship, Ennistymon were nominated by the Clare County Board to represent the Banner in Munster.
En route, Ennistymon drew 3-12 to 2-15 in the first round of the Clare Championship against Bodyke, and beat Meelick 2-12 to 0-12 and Eire Óg Ennis 2-9 to 0-13 in rounds two and three.
And having received a bye in the fourth series of games, they rounded off the league section of the competition with a 3-7 each draw with O’Callaghan Mills.
Topping Group Two they played Sixmilebridge in the semi-finals, where their campaign ended.
The Clare side will come into this weekends game with Fenor with a game against Tipperary’s Ballylooby-Castlegrace under their belts in the quarter final stages of the provincial competition.
Fenor go into Sunday’s game unbeaten side, as they have won nine of the 11 games that they have played to date in 2015.
They recorded wins over Ballydurn, Ballyduff Lower and Clonea before drawing 1-14 to 0-17 with Passage in Walsh Park in round four of the Eastern Championship.
They got back to winning ways in round five beating Roanmore, Mount Sion in round six and Bonmahon in round seven before finishing the league section of the competition with a 3-12 to 1-18 draw against Ballygunner.
Topping their group, Fenor were spared playing a quarter-final and in the semi final they beat Ballygunner 2-13 to 1-11 at Walsh Park before defeating at Passage by 1-12 to 0-13 in the Eastern decider.
Fenor’s last run-out against Saint Mary’s saw them come from one point down on the hour mark to win by one, adding two points in added time, the first from Ben Gallagher and the winner from super-sub Sean Cheasty.
Fenor will be hoping for more of the same with a Munster Final against Cork’s Dungourney or Limerick’s Dromcollogher-Broadford on December 6th in Mallow up for grabs.