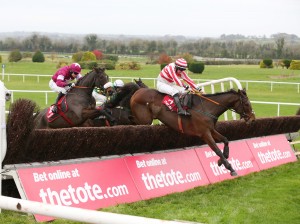 Arctic Skipper ridden by Sean Flanagan jumping the last fence to win the tote.com Fortria Steeplechase from Gilgamboa and the Game Changer

Waterford-trained horses continued their rich vein of success this past week and on Sunday, Bonmahon-based handler Vincent Halley experienced his most prestigious career success to date by saddling Arctic Skipper to spring a mild surprise with Sean Flanagan in the Grade 2 thetote.com Fortria Chase over two miles at Navan on Sunday.

On what was his first run of the season having finished third in a Grade 3 chase over three miles at Cork when last seen in March, the towering Arctic Skipper was sent off at 25/1.
The winning son of Flemensfirth had to be rousted along with three fences remaining, but he edged ever closer from two out and indeed, he led briefly at the final fence.

Gilgamboa now went into pole position, but Arctic Skipper was in no mood to be denied and he stormed to the fore in the very dying strides.
At the post, he had a short head to spare over the JP McManus-owned Gilgamboa with two and three quarter lengths back to the odds-on favourite Ballycasey in third spot.

Halley, whose father Lar owns Arctic Skipper, later paid tribute to staff member Nick Kiely for his role in the gelding’s success.
On this evidence, Arctic Skipper, who started off by winning a Glenbane four-year-old maiden point-to-point in October 2013, is likely to make a nice name for himself this season.

Arctic Skipper was partnered by Sean Flanagan, who of course now operates as Noel Meade’s stable jockey. Flanagan was earlier on the mark aboard Meade’s Snow Falcon in the afternoon’s other Grade 2 event, the Lismullen Hurdle over two and a half miles.

Snow Falcon went in pursuit of runner-up De Plotting Shed after two out and he surged to the head of affairs on the flat to dispose of Gordon Elliot’s charge by three and a quarter lengths. Meade, in the midst of a purple patch at present, indicated that Snow Falcon could now be upped to three miles over hurdles and the likelihood is that he will now be seen at Leopardstown’s Christmas meeting.

There was racing at Naas on Saturday and Killack, Enniscorthy native JJ Slevin certainly experienced a stellar afternoon for he partnered an initial two-timer since joining the professional ranks this summer.

Slevin got off the mark aboard the Liz Doyle-trained After Aspen in the Sean Brady Constrution & Engineering Limited Novice Handicap Chase.
After Aspen, who was having an initial start of the season, had to be asked for an effort in third after two out. The Mountain High-sired After Aspenm is nothing but tough however and he powered ahead on the run-in to eclipse Spancil Hill by three and a quarter lengths.

A daughter of Kalanisi that’s closely related to former top racemare Solerina, Fayonagh made all the running in this 20-runner contest and she had sufficient reserves of stamina left to fend off Martello Park by two and three quarter lengths. It could well happen that Fayonagh will now be sold.