HURLEY TEEING UP FOR BIG YEAR

Niamh Briggs. Tom Queally. Dan Shanahan. John O’Shea. Susan Smith. Sean Kelly. The list of Park Hotel Waterford Supreme Sports Stars goes on and it’s a club that 2015 joint winner Gary Hurley is now a proud member of.
And now the Walker Cup winner is dreaming of joining other listings – the final pairing down the home stretch in a major championship, standing over a putt to win a Ryder Cup point for Europe, and all that comes with the life of a top level professional golfer.
“Well it’s a great honour to be part of the list of Park Hotel Award winners,” said the West Waterford clubman, reflecting on his sharing the 2015 Supreme Award with Ferrybank AC’s Thomas Barr. 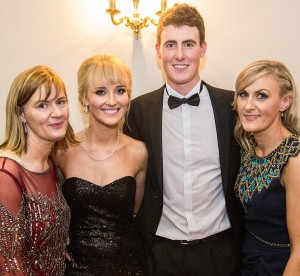 “I’m just delighted for myself and everyone who has supported me since I was a kid, since I started playing golf: the club, my family, and a lot of my friends too, all of whom have made great sacrifices for me along the way. As I said, it’s a great honour to be up there alongside so many household names; I’m happy with where I’m going and I hope that’ll lead to more success in the future.”
Despite turning professional in the wake of a successful 2015, highlighted by his displays in the Walker Cup and the European Amateur Championship, Gary said his focus remains unaltered, even if invitations and prize money are pivotal to future progress.
“The golf doesn’t change, the golf courses haven’t changed and the competition, while not necessarily better, is going to become more stacked; the top of the leaderboard will probably be a lot closer than it would be at an amateur event so the only thing different, I feel, will be how to manage myself off the course; you’ll have a couple of guys helping you but you have to make sure that you’re happy with what they’re doing for you, whereas when you’re an amateur, the Golfing Union of Ireland were brilliant to all of us coming up through the ranks.”
He continued: “They did a great job for us, be it the Irish National coach, Neil Manchip who won a coaching award a few weeks or even in the background in the GUI office, they take care of a lot of stuff that we didn’t even have to think about when we travelled – we’re never even had to print off a boarding pass for a flight, they did everything for us…and now I’ve got to take that on myself, it’s a little bit new and you try and get all those things arranged in plenty of time beforehand. It’s not a big deal as such but it’s just something else I now have to factor into life as professional.”
Housemates with Paul Dunne (who lit up the British Open last summer) and Jack Hume, Gary said that Dunne’s winning a European Tour card was something he was keen to replicate as soon as possible.
“You tend to feed off and benefit from being in a good environment, and the three of us get on very well; we help each other out, take views of each other’s swings when we’re practicing or on the range. We’re really good friends, we get on really well and we root for each other all the time so the success of another doesn’t really negatively impact on someone else within our group.
“You’re happy for them and it just makes me want to get to that level. It doesn’t add further pressure on me anyway; I’m concentrating on my goals, I want my friends to succeed too but I want to keep improving every year and if I do that, then I believe I will make it hopefully sooner rather than later. But if I keep improving, I’ll make it.”
Qualifying School is an experience most golfers would not like to repeat, and with the Challenge Tour centrally occupying the year ahead, Hurley hopes he can make a positive impact over the next few months.
“I don’t actually have a category in the Challenge Tour – I’ve invites – so I have to play my way onto the Tour first and try and worry about getting into the top 15 at the end of the year but that’s all an outcome goal – need to concentrate on the process and what I can do now in the summertime, and I’m trying to plan my next couple of months as best I can.”
Having travelled to Portugal for some winter training following his Park Hotel success, Gary is gearing up for his first Challenge Tour event in a Kenya, “a new experience” that he’s looking forward to tackling.
“That tournament runs from March 17th to the 20th and we’ll be flying over on the 13th and I’m really looking forward to that – I’ve the flights booked and all so I’m hopeful I can make a good start to 2016..
“Golf is funny. When you’re playing well, you actually don’t think you can ever play badly again and then when you’re playing badly, you don’t ever think you can play well again – it’s a crazy game that way!
“And when I started in university four years ago, I really wasn’t sure if I was going to go pro; it wasn’t a definite goal of mine, it wasn’t in my mind at all, I just wanted to keep getting better every year. And, thankfully, every year that went by, I did get that little bit better and I started to perform at a higher level in bigger tournaments.
“And then last year, I did quite well in some big international events and I thought to myself, well if I keep improving, then perhaps I can get to another level again.
“And when you’re selected for the Walker Cup team, and when you look at some of the names from teams in the past that are doing so well on the Tour right now, then that offered further encouragement to me in terms of making the decision to go pro, and now I’ve made that decision and it’s one I’m happy to have made.”
Looking down the line, the quietly spoken Hurley was at his most animated when he allowed himself a thought or two about his golfing future and where he hopes it lies.
“There’s no-one really like Tiger (Woods) out there now, when he was miles ahead of everybody else – I can’t see that ever happening again because everyone is so good and playing at the same level – pretty much anyone can now win on any given week. 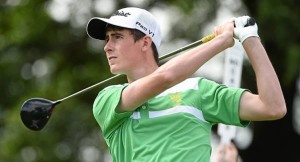 Gary Hurley: aiming for the big time after a great conclusion to his amateur career.

“But hopefully someday I can get to a level like that where I can compete in big events and be coming down the home stretches on Sundays, that’s the thrill of playing golf, amateur or professional, being in the hunt on the last day and seeing how you handle yourself and your game…
“I’ve not pinpointed one particular event looking down the line – I’d have goals written down for myself alright – but I’ve never allowed myself to dwell too long on the distant future, at least in golfing terms. I’m trying to stay with what I can do now and what I can influence now in terms of improving my game and getting more confident in terms of my new surroundings within the professional game, and hopefully I’ll kick on from there.”