Home » Sports » Soccer » "I could not fault their effort" Alan Reynolds

"I could not fault their effort" Alan Reynolds

League of Ireland, Premier Division
Alan Reynolds was needless to say disappointed to have watched his side lose out on the chance to finish third and he gave his opinion on the outcome of the contest after the game. “We didn’t really start in the first half and they played very well and I felt that a goal was coming. We rode our luck at times but then we gained control and we began probing but their goalkeeper made some fine saves. “When you get on top you have to take the chances during a period like that. 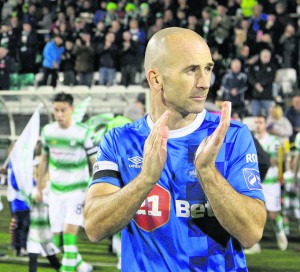 Their second goal hurt us badly and it could have been defended better because the ball bounced around in the box before they found the net. “We made changes for the second half and I thought Dessie Hutchinson did very well and we had a go at them and I could not fault their effort. I know we got caught with their third goal but at times we passed the ball well. Going back to our good period in the first half I thought we were really good but we need to play like that from the start of the game. People may have thought it was a nothing game but you would not think that the way the game went on and my players are very disappointed in there right now. We worked hard despite the fact we were two goals down and everyone stuck to their task. Perhaps we could have pushed on when we scored but they managed the game well and you have to give them credit for that. They saw the game out well.
“We now play Limerick in our last game and I will give players a chance who need to play .Dessie was excellent tonight when he came on and Noe (Baba) and other guys will play. We will have fresh legs. Dessie is a great lad and having come back from Brighton he found it hard to break into the team with Stanley and Bastien but he is one for the future and he is a local lad.”