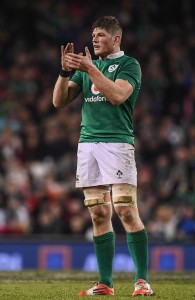 “The whole place is so proud of Jack now,” Waterpark RFC Junior Drohan told fellow clubman turned rugby scribe Murray Kinsella prior to Jack O’Donoghue’s international rugby debut against Canada on Saturday last.
“The whole town is talking about him. It’s just so great for his family, they’re an unbelievable family.”
Jack (22) proudly wore the number eight jersey against the Maple Leafs during Ireland’s 52-21 victory at a packed Lansdowne Road, taking his place alongside returning regulars Sean O’Brien and Peter O’Mahony in the Irish back row.
And while O’Donoghue’s claims for a regular place in the Test Match 23 may be a little further down the tracks, the Waterpark alumnus could be satisfied with his first senior start. And one suspects it was no accident that Joe Schmidt gave Jack the full 80 minutes on Saturday last.
“Jack first impressed me at Under-20 level, particularly when he led the U-20s in New Zealand to the (World Championship) semi-finals,” said the Irish coach, who is busy planning for Saturday’s clash with the World Champions in Dublin.
“I spoke to him out there and he impressed me as a guy who was very level-headed and very driven to get to the highest possible level.”
As for the man himself? “It was a great team performance and I was delighted to get my first cap,” Jack told Irish Rugby TV following the full-time whistle.
“We probably fell out of our game plan a bit there and (Canada) came back with two (first half) tries and we just needed to re-gather under the posts and as soon as the restart went, we were ready to go again.”
As for the pace of the game, Jack admitted: “Yeah, it was pretty intense there; probably a bit quicker than what I’m normally used to, but I’m delighted.”
Jack has joined Ben Cronin as a ‘Park clubman who has worn the senior international jersey; with Cronin earning his two test caps in 1995 and 1997.
Speaking to The42.ie, Waterpark coach John Molloy said: “People are proud of (Jack) because they know him. Every chance he gets he’s still back in Waterpark and he’s kept his contact, his friends and mates here. He’s still one of the lads down here, still one of the boys.”
Junior Drohan added: ““Never, ever does he forget his roots. Any time he’s in Waterford, he’d be up at the U18s or U16s, whoever is playing he’d be at the game and he’d be in the club house after the game. He never forgets his roots.”
Jack’s immediate term goals are likely to concentrate on consolidating Munster’s magnificent form since the shock passing of Head Coach Anthony Foley, the finest Number Eight in the province’s history. Like Axel, Jack is a natural leader and tigerish competitor. Expect many more caps down the line for a young man flying the Waterford flag at the highest level of the Union Game. Congratulations, Jack!